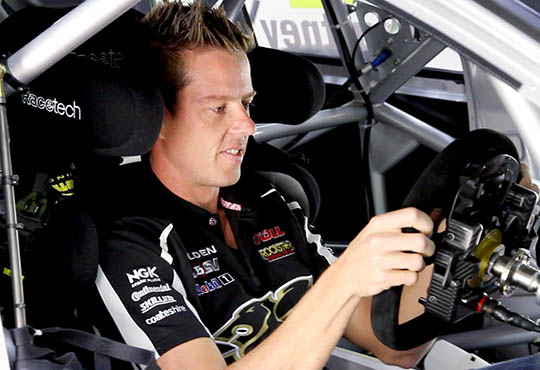 2010 V8 Supercar Champion James Courtney has been awarded the honour of driving the Commodore for the test.

“It’s a great honour to be the first HRT driver to drive the car in anger, I’m excited about getting out there tomorrow and having a crack,” Courtney said.

“The shakedown went smoothly; Nick did a great job doing all the systems checks and the car performed faultlessly. These [HRT] guys are accustomed to building new cars and there weren’t any issues.”

While many of the current V8 Supercar drivers will have to learn a new driving technique due to the COTF’s independent rear end, more sophisticated transaxle gearbox and improved weight distribution, Courtney has experience racing cars with similar engineering philosophies during his time overseas.

“For me, it’s going back to what I’ve known with the independent rear and better weight distribution with the gearbox in the back from Super GT and the formula cars I’ve raced,” he explained.

“I’m super excited to get back and have a taste of that driving style. It’ll be quite an evolution from the way Supercars are now with a stop-start arrangement.

“For me as a driver and us as a driving group it’s quite an exciting time, and also for the engineers to let their hair out, experiment and try new things.”

Courtney believes the extra sophistication will challenge drivers and engineers, as they try to optimise the new package.

“The cars are very different to set up and different to the way you get the speed out of them. It’s exciting for the championship,” he said.

“The car looks great; the carbon and gold is a good colour scheme,” he said.

“Holden Design did a great job with the livery. There are even a lot of Ford fans saying they love it and that we should race with it. It looks fantastic!”