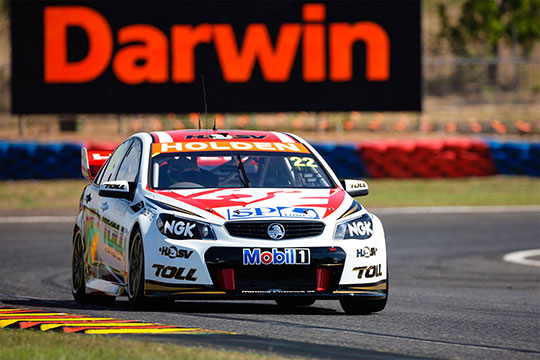 Courtney surged to the top of the timesheets in the closing minutes of the first of two fifteen minute qualifying sessions with a time of 1:08.5384 to land his first pole of the 2013 V8 Supercars season and his first pole for the Holden Racing Team.

As the chequered flag fell for the end of the session, Pepsi Max Crew FPR’s Mark Winterbottom dived into second with a 1:08.6296 ahead of team-mate Will Davison. Fabian Coulthard (Lockwood Racing) came from nowhere to be fourth ahead of Race 17 winner Jamie Whincup. Tim Slade picked up from where he left off yesterday taking sixth, while Jonathon Webb (Team TEKNO Darrell Lea), David Reynolds (The Bottle-O Racing Team), Shane van Gisbergen (TEKNO VIP) and Craig Lowndes (Red Bull Racing Australia) made up the ten.

With five minutes left on the clock Tony D’Alberto still had not completed a flying lap, sitting in a very busy pit lane, with twenty-six of the twenty-eight cars waiting until the dying minutes to post their final flying laps.

McLaughlin and Prémat remained out on track and posted jumped to position one and two with times of 1.09.098 and 1.09.203. McLaughlin then lowered the mark even further, posting the first time in the 1.08’s before everyone took to the track once more, pushing the Fujitsu Racing GRM pair out of the top ten.

At the session end, less than one second covered the entire 28-car field.