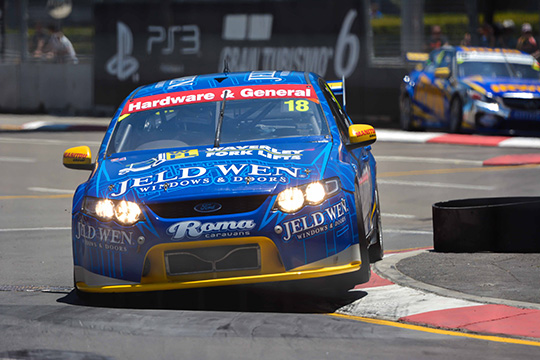 Jack Perkins will return to the V8 Supercars Championship in 2014 with Ford Performance Racing after securing a full-time drive in the #18 Charlie Schwerkolt-owned Team JELD-WEN Ford.

Perkins, who finished fourth in the Dunlop Series this year, will pilot the factory-Ford team’s fourth car replacing Alex Davison.

The 27-year-old’s impressive performances in the second-tier championship and as co-driver at Garry Rogers Motorsport during the Endurance Cup rounds plus a strong endurance co-driver season in New Zealand led team-owner Schwerkolt to give Perkins his first main series full-time drive since 2007.

“Jack has been knocking on the door to get back into the series for a long time and his results this last year have been especially impressive in the context of all the high-quality drivers he was competing against,” Schwerkolt said.

“I’ve known him since he was just a kid and he is a great person and will fit right in with everyone at JELD-WEN and FPR.

“Jack is very hungry and he knows he needs to perform so I think what our team offers with the resources of FPR will be the right environment for him to flourish.”

Perkins made his main series debut as a 20-year-old with Perkins Engineering at the 2006 enduros, before landing a full-time championship drive in 2007. However, his season in the top tier was cut short after he was diagnosed with Type One Diabetes and he stepped aside for the final two rounds.

A second full-time championship drive came with the team’s successor, Kelly Racing, in 2009, but after a disappointing season, Perkins was not retained into 2010.

“I am absolutely stoked to be back driving in the main series as it has been four years in the making so I can’t thank Charlie enough for the opportunity,” Perkins said.

“The drive is a Christmas present come early and I am really looking forward to repaying the faith Charlie, JELD-WEN and all the team’s other commercial partners have put in me.

“It is cool to be part of Ford’s four car factory squad. I have three very handy drivers to work with and I can’t wait to start working with everyone at FPR as Charlie has put together a really good program with the team.

“He has won a title as an owner so combined with FPR’s resources and obvious car speed it has all the right ingredients. I wish Clipsal was on this weekend as I am that keen to get going.”

Perkins will first sample the #18 Team JELD-WEN Ford at V8 Supercars’ Eastern Creek test in February before the 2014 season-opening Clipsal 500 in Adelaide from 27 February – 2 March.