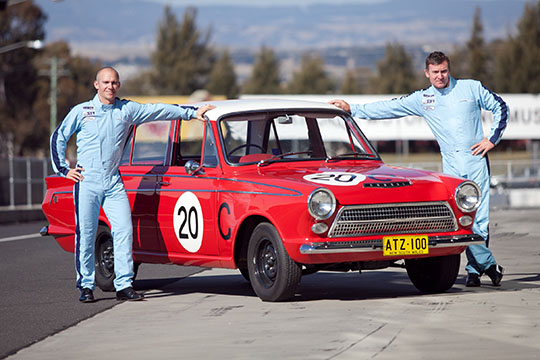 IRWIN Racing has gone back in time as part of the lead-up to the 50th running of the Supercheap Auto Bathurst 1000 on October 7.

The IRWIN Racing duo took to the famous Mount Panorama in the Cortina which is identical to the winning car down to the number plates which were required under the road registered rules of the time.

Holdsworth and Baird lapped the circuit under normal road rules, obeying the 60 km/h speed limits. Even at that leisurely pace both drivers got an appreciation for what it would have been liked at the first 500 mile production car race at Bathurst.

The car was as it finished with vinyl seats and even standard wheels and tyres of the day. In fact the car completed the race distance on the one set of tyres.

Going on last year’s Great Race the winning car finished the 161 laps in just under six hours and 27 at a race average speed of 155 km/h. Compared to the 1963, race teams now do 30 more laps, finish the race in 80 minutes less time and average 50 km/h faster.

WHAT THE DRIVERS HAD TO SAY:

“It’s great to get to drive one of the old production cars and it gives you an appreciation of the era of racing,” said Holdsworth.

“It did all 500 miles on one set of tyres and this year we expect to change the rubber up to eight times during the 2012 race.

“Standard everything in the car and no power steering, plus the track had very little in the way of run-off areas or safety fencing.

“The race these days is called an endurance event, but it’s a 100% sprint from the word go. If you drove the 1963 Cortina the same way we do the modern day V8 Supercar it would be out of brakes after three laps!”

“You certainly would not want to have a crash in it that’s for sure,” said Baird.

“No six-point driving harness, sliding around on vinyl seats with no safety gear in it at all. It was a real survival of the fittest back in those days.

“It gives you a great perspective on how things have evolved with the cars and the track. We can re-create what it would have been like to drive the car, but in terms of how the track has changed you can’t go back to the days without fences — thank goodness!”

The Cortina GT was developed after the standard cars had their design settled, and was released in April 1963. The two-door cost £749 (approximately $1500).

The GT’s engine was developed by Cosworth. The 1500cc produced 78 bhp at 5200 rpm, with the help of a double-barrel Weber carburettor pushing the GT up to 153 km/h.

The gearbox featured a ‘remote’ change with standard Cortina ratios. A heavy-duty clutch was used, and a larger diameter driveshaft. The braking combination was 241mm discs front discs and 229mm x 45mm drums rear drums. Wheels were steel pressings, with 4″ rims wrapped in 5.60 – 13″ crossply rubber. Radial tyres were not available.