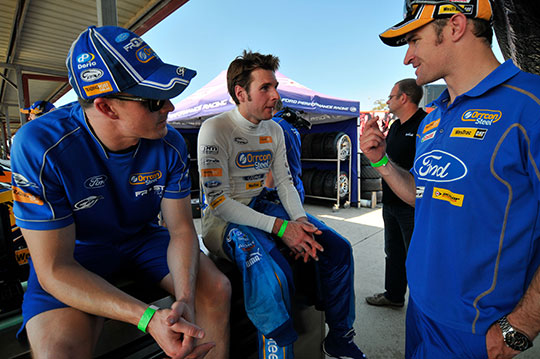 Ford Performance Racing’s international co-drivers have shown their credentials following a successful day of testing at Queensland Raceway ahead of this weekend’s Gold Coast 600.

Will Power, Mika Salo and V8 Supercars newcomer Nick Heidfeld impressed the team with their pace and ability to adapt quickly to the factory Falcons.

The team’s three regular drivers went out early in the day with Will Davison setting a lap which was not bettered for the rest of the day.

Davison, Mark Winterbottom and David Reynolds then handed their cars over after the opening hour.

Lap times of the internationals were not easily available, though unofficially Salo had recorded the fastest time for a guest driver by the early afternoon before a late shuffle of the order due to soft tyre runs saw Heidfeld jump to second.

Salo quickly settled into a rhythm and also made clean getaways during a session set aside for the co-drivers to practice standing starts.

Power was sampling FPR machinery for the first time in two years and after early familiarisation he was quickly working on a range of changes as well as acclimatising to a closed roof race car in very warm conditions.

Newcomer Heidfeld spent the most amount of time in the car of any of the team’s visiting drivers and gradually increased his pace across the day.

It was his first experience of a right-hand-drive race car, though as the most experienced Formula 1 driver in the field he showed why he is so highly regarded by setting the second-quickest co-driver time by day’s end.

He quickly adapted to standing start practice and was pleased with his progression.

The team will get its first look at the Surfers Paradise circuit tomorrow afternoon during track walk where the new kerbing around the chicanes will be visible for the first time.

DRIVERS’ VIEW:
Will Power – #5 Orrcon Steel FPR Ford:
“It was a good solid day and I got plenty of laps under my belt which was important before we get to the Gold Coast. The practice starts eventually came back to me, though the international drivers will likely be starting the races so it is something you have to get your head around. I seemed to do reasonably well which is crucial. It was hot in the car but the cool suits and helmet fans now make it a lot easier but it didn’t stop it being really hot.”

Mika Salo – #6 Tradingpost FPR Ford:
“It was a good day. It has been one year since I was last in one of these cars so it was more about re-learning where all the buttons and switches were and getting used to the right hand drive. The practice starts were good. I did a few and I am now feeling comfortable with the car so all is okay so far.”

Nick Heidfeld – #55 The Bottle-O FPR Ford:
“Everything went smoothly and I am really happy. We did some laps early to acclimatise and then did some starts with all the other internationals which were a really good idea. Then I did a long run and finally a fresh tyre run to get a feel of new and old tyres along with some set-up changes. Overall it was a really fun day. It is difficult to know how well I really drove as I don’t know the car and have nothing to compare it against but I think it was okay.”