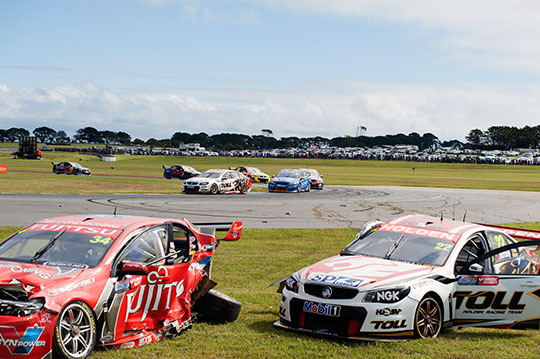 James Courtney will miss the final round of the V8 Supercars season, the Sydney 500, after tests revealed the Holden Racing Team driver has fractured his tibia and torn a quad muscle.

The 2010 V8 Supercars Champion was injured in a horrific crash during the first race of the Sargent Security Phillip Island 360 last Saturday.

Courtney’s HRT Commodore was hit heavily on the driver’s side by Alex Prémat’s Fujitsu Racing GRM Commodore, which had left the circuit at high speed due to a tyre puncture.

Both drivers were taken to the circuit medical centre and underwent immediate examination, with both later released.

On medical advice from V8 Supercars medical delegate, Dr Carl Lee, Courtney then underwent further examinations which revealed the extent of his injuries.

“The scan showed a fracture to my tibia, and a tear in my quad muscle. It’s quite painful but I’m doing alright and it’s good to know what the damage is,” Courtney said.

“Unfortunately I won’t be racing at the Sydney 500, it’s my hometown race and always exciting. Being a racer I would be out there right now if I could but it’s better to get the recovery process started so I come back firing on all eight cylinders next season.”

Courtney will be on crutches for the next six weeks, but his injury will fully heal in plenty of time for the new season.

Courtney will be replaced in Sydney by Nick Percat.

Walkinshaw-contracted driver Percat, who has spent this year in the Carrera Cup after three seasons in the Dunlop Series, will make his first solo start in the main series at the Sydney Olympic Park circuit, having previously competed in eight V8 Supercars Championship endurance events for the Holden factory team.

“Our immediate concern is for James and while we understand he is disappointed to be missing the Sydney 500 on doctor’s advice we are firm in that it is best for him to focus entirely on his recovery,” Hallam said.

“Nick Percat will replace James for the event. Nick has a long history with the Holden Racing Team and Walkinshaw Racing and we appreciate Nick making himself available.”