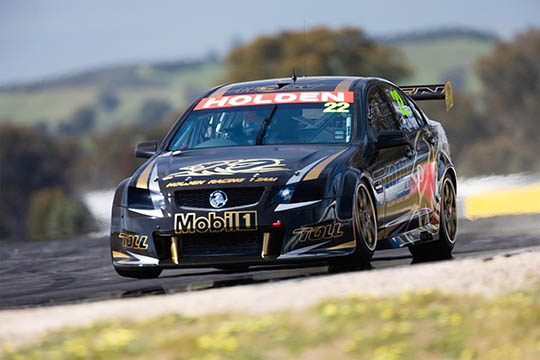 The Holden Racing Team has successfully completed its first full Car Of The Future test.

2010 V8 Supercar Champion James Courtney drove the 2013-spec chassis at Winton Motor Raceway, the Commodore running reliably throughout the day with the team gathering some valuable data. Courtney was impressed by its early potential.

“It’s definitely been very encouraging, this first hit out of the new car, and I can’t wait to get out and race it next year,” Courtney said.

The COTF chassis features fundamental design changes compared to the current V8s, including transaxle gearbox and independent rear suspension, Courtney highlighting the differences in the car’s behaviour and handling.

“The car’s very, very different in the rear end to what we’ve got now, which is ‘stop, point, and shoot’,” he said.

“It has good turn in and carries speed through corners, so requires quite a different driving technique; the characteristics and driving styles are probably something I’m more used to from other categories I’ve raced – Formula cars and Super GT.”

HRT will complete further testing with the COTF chassis, and Courtney is relishing the technical challenges ahead.

“I’m really looking forward to developing this car and getting it more up to speed, so we can hit the ground running next year,” he said.

While Courtney and HRT are working away on the COTF program, their immediate focus is still upon the five events remaining in the 2012 season, starting with next week’s Supercheap Auto Bathurst 1000.

“Bathurst is a huge one, it’s a great event and the atmosphere there is second to none,” Courtney said.

“We roll in on Tuesday and the atmosphere’s already there, so it’s a great week, and I can’t wait to get up there!”

Defending champions Garth Tander and Nick Percat will team up in the #2 HRT Commodore, Courtney and Cameron McConville will drive the #22 entry.