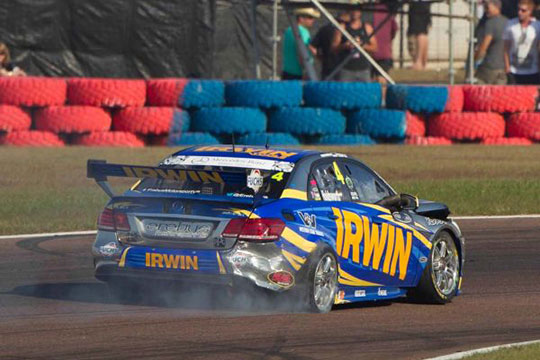 Upgrades to Hidden Valley Raceway have been given the stamp of approval by drivers as the V8 Supercars season returns to action this weekend at the Darwin circuit.

The renovation work is the first phase of a $9.5 million upgrade by the Northern Territory government and includes the addition of a concrete barrier between Turns 1 and 4 in place of the old earth filled tyre wall.

The distance between the track and the wall has also been increased in an effort to increase the likelihood of accidents being avoided altogether.

Calls for the redesign were prompted after several incidents in last year’s races including a multi-car crash at the start of the final race which saw cars ricocheting off the tyre wall at the exit of Turn 1 and back into the oncoming traffic and left Dean Fiore’s Dodo Insurance Racing Commodore on its side.

Nissan Motorsport driver Todd Kelly acknowledged the changes, knowing all too well the damage the old tyre wall could inflict after a huge crash at the same spot in 2003 destroyed his Holden Racing Team Commodore.

“As strange as it sounds, concrete really is a lot better in that situation than tyres,” Kelly told Australian motorsport news website, Speedcafe.com.

“I was one of the unfortunate ones who tested the tyres out and when you get fired into those (tyre walls) it grabs the car quite violently.

“I went in at about a 45 (degree angle) on the front and it grabbed the front of the car and spun it around that quick that it almost did as much damage to the back of the car as the front.

“With the concrete you just glance off and it does less damage. It’s a good improvement.”

Improvements to the kerbing in the final sector of the circuit have also been made, with a new kerb added at Turn 10 along with an extension to the Turn 11 kerb.

“Whenever we come to Darwin, they always improve something,” added Red Bull Racing Australia’s Jamie Whincup.

“The safety out of Turn 1 is no different and it’s good to come here and see that they’ve added the kerbs around the back of the circuit as well.

“It’s good that they’ve listened to the drivers,” he continued.

Further upgrades including a complete resurface of the circuit will get underway after this weekend’s round.