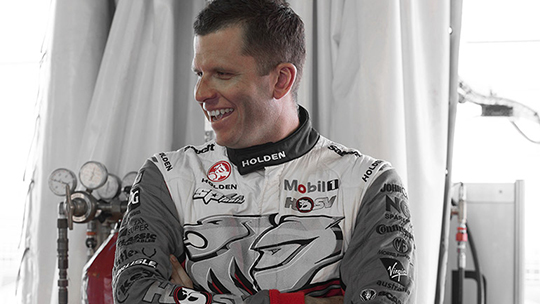 Garth Tander will continue to race for the Holden Racing Team after signing a new multi-year deal with the Walkinshaw Racing squad.

The new deal, announced ahead of Tander’s home event in Perth this weekend, is believed to be a two year extension to his current contract, keeping him at the team until the end of 2016.

The 2007 V8 Supercars Champion and three-time Bathurst 1000 winner has been with the Holden factory team for seven years and 2014 marks his 17th season as a full-time V8 Supercars driver.

“It’s an exciting time for the team, with the structural changes made before the start of the season starting to bear fruit. I really believe in what we’re doing, so it’s great to be part of that.”

“We’re over the moon with Garth re-signing, and committing the next stage of his future, to the Holden Racing Team,” said Burgess.

“Consistency within the engineering group and drivers is especially important for our long-term development.

“As a driver, he’s the total package. He’s won over 50 races, including Bathurst three times, and he’s a champion. So he’s got everything we need to help drive the engineers and the team forward.”

“The partnership with Garth and James is a great one,” Burgess said.

“They’ve got a lot of respect for each other. They’re both highly motivated and determined, and don’t accept second best. For me that’s important to have that element from the drivers. They get on well both off-track and on, and that’s what we need within the team at the moment.”