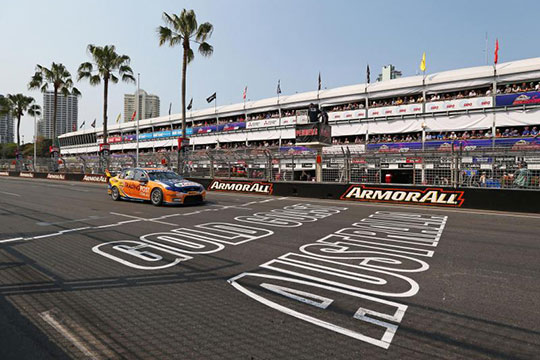 Townsville, Ipswich and the Gold Coast will continue to host V8 Supercars events until at least 2016, after a new funding deal was announced by the Queensland state government on Monday.

The future of Queensland’s three V8 Supercars rounds appeared uncertain after the three events did not figure in Queensland Government’s projected annual budget for 2014.

Queensland Premier Campbell Newman, however, confirmed the new agreement between the Queensland Government and V8 Supercars will see the continuation of the Gold Coast 600, Townsville 400 and Ipswich 360 for a further three years.

“This is great news for tourism in Queensland and for motorsport fans across the State,” Mr Newman said.

“The agreement follows extensive negotiations between the Government and event organisers and is a good outcome for both sides.

“In addition to securing the events for Queensland, our investment in V8 Supercars will be focused on event outcomes, driving more visitors to the State, providing a boost to the economy and community as well as showcasing Queensland’s destinations.

“Today’s agreement with V8 Supercars supports our vision that tourism is one of the four pillars of the Queensland economy and adds to a growing calendar of sporting, arts and regional events backed by Tourism and Events Queensland (TEQ).”

V8 Supercars chief executive James Warburton was delighted at the continued funding deal and said securing the future of the Queensland V8 Supercars events was a crucial for the championship.

“Queensland is vital to V8 Supercars. The Gold Coast is the home of our company headquarters, and South East Queensland is a major hub for our teams.

“In 2016 we will mark a quarter of a century of the iconic Gold Coast event – 25 years of amazing history and success. I congratulate all who have been involved, some of them every single year, in the Coasts’ largest annual event of any kind.

“Of course these signature events are not possible without Government and community support which ensures they achieve success and significant, ongoing benefits to the respective regions.”

“Events of this magnitude are so much more than a motor race; they showcase cities and regions, provide much needed jobs, achieve a sense of community pride and encourage visitors.

“It is our commitment here today to the Premier and the Queensland Government to keep developing and growing these events.”