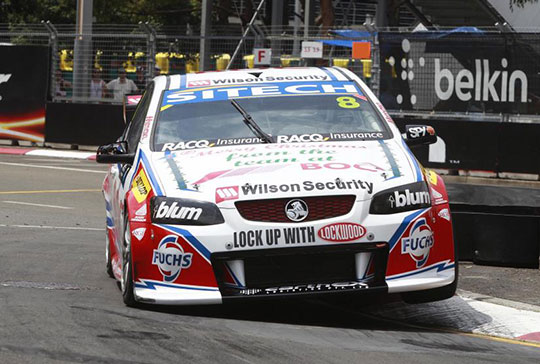 With only one hot-lap in qualifying, thanks to an unusual amount of stoppages, Bright said he was lucky to start from 12th and capitalised by moving up to seventh off the start line.

He was issued a stewards penalty a few laps later, however, for contact with Tim Slade and ordered to redress the place.

That put him ninth and, more importantly for strategy, behind team-mate Fabian Coulthard, which could have meant queuing in pit lane had a safety car been called.

Bright decided to pit early and avoid that situation, meaning he spent the rest of the race conserving fuel to make it to the finish in ninth place.

V8 Supercars will be back on track after the summer break for the Clipsal 500 from February 28th to March 3rd.

Jason Bright
Team BOC
“It was a bit disappointing to end up getting the penalty on the first lap. I saw a move yesterday from Courtney and Whincup that looked pretty desperate and cost a few people a lot of positions. I was told it was just down to first lap congestion so I think there’s still a lot of inconsistency with our rule makers.

“The penalty put us behind Fabian, which put us on a different strategy because otherwise we might have ended up having to queue if there was a safety car. We pitted very early, which meant we had to trim fuel for the rest of the race.

“I mucked up my footing at one point and ended to go down the escape road but, otherwise, the car had good pace.

“In qualifying I made one mistake on my first set of tyres and we aborted that. I never got another full lap until the last four minutes, which meant we were behind the eight ball. If you put my best sectors together we would have ended sixth or seventh.

“All in all it wasn’t the day that we hoped for but I think we showed both cars had top ten pace. Going into next year we’ve got all the same team, engineers, drivers and sponsors so we can hit the ground concentrating on how to make the cars better, not learning how everyone works.”