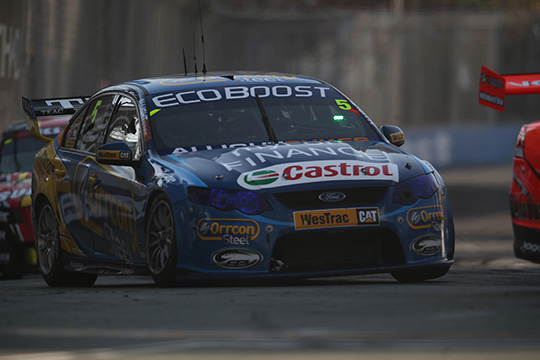 Ford Performance Racing has salvaged a podium finish during a day of chaos at Surfers Paradise where after multiple attempts to start the race Mark Winterbottom and Will Power claimed third following a stirring drive by Winterbottom.

Power nearly stalled off the line at the eventual start and dropped to 10th by lap two.

Mika Salo started second but was first by turn one and would stay there until the end of his stint on lap 38.

Nick Heidfeld impressed yet again and after a clean start he gradually pushed his way through the field.

Following a number of impressive moves he handed the car to David Reynolds in fourth.

Davison’s time in the car was to be short-lived as he crashed into the tyre barriers on his first flying lap, forcing him to pit for lengthy repairs which would see him eventually finish many laps down in 18th.

At the same time Davison hit the wall, Power was having radio troubles and missed the initial call to pit. Despite the issue he stopped from first which began Winterbottom’s charge. He re-joined in ninth and with a time-shortened finish ahead he used his fresher tyres and aggression to scythe his way through the field.

Following a late safety car he jumped to third and though he was catching the top-two at nearly half-a-second per lap he ran out of time and had to be content with third.

Reynolds was sixth and just behind Winterbottom when on lap 66 he was hit by Garth Tander while attempting a passing move.

The impact, which occurred when he was alongside his rival, broke the steering and put him and Heidfeld out of the race when another podium finish looked likely.

The team has only minor repairs to make overnight before tomorrow’s qualifying and second race.

Winterbottom suffered the unusual issue of having Channel 7’s commentary broadcast through his headphones – an issue which severely distracted him and meant he only qualified sixth.

Davison was in the hunt for pole though missed out by a narrow margin in claiming second.

Winterbottom: “It was a really tough race. You need a few things to go your way if you are to come back from ninth which is where we emerged when I got in the car, but the car was great and my stint was really time-management due to the shortened race though we ran out of laps to get back to the lead. It was great to pass all the cars I did and while we look back at what might have been if things went smoother I couldn’t do much more today.”

Power: “Frosty did an exceptional job. He is unbelievable, though I think I made his job tougher when I bogged down at the start. At the end of the first lap I flat-spotted a tyre so had to nurse that all the way through and then I had some radio dramas. To get back from where he did to the podium is really good. If we get can get all those little things right tomorrow and have no qualifying issues we should be in with a good shot at the win.”

Davison: “Today certainly didn’t end how we thought it would. Qualifying went well, the shootout too and after Mika grabbed the lead we were exactly where we needed to be. He came in first and I took over the car, but we didn’t get much further. My hit with the wall was pretty hard and the damage cost us any chance at the win and any real points. I’m gutted as we’ve been on pole or second in the last three races and have a best-finish of 17th. We have only one goal tomorrow and I want to send Mika home with a winner’s surfboard.”

Salo: “I made a good start at the one that counted and got into the lead. I didn’t have any problems and while I was a little slower in the last sector I was able to keep (Sebastien) Bourdais behind me. We had a small radio problem when I pitted but after that it was a sad finish for us. But, at least we have another chance tomorrow to try and win.”

Reynolds: “Nick did a fantastic job. He started 12th and brought (the car) back in fourth which is brilliant. I couldn’t ask for more and he was really enjoying himself. Then I jumped in and had a fair bit of pace. I caught (Garth) Tander and went to pass him but he moved across on me under brakes which is not allowed. He crashed into me, bent my steering and ruined our race. We remain positive and we get to start a fresh tomorrow but we should be aiming high again.”

Heidfeld: “It was an eventful day. We were disappointed with qualifying though we knew we had the pace to move up the field. I had three chances to get the start right due to all the crashes and on the last one that counted I lost a few positions. From there it was great fun and I enjoyed overtaking a lot of cars. Then David got into the car and really good pace and we were in a strong position until he was hit which was unfortunate. It broke something on the steering. Overall it is good to have two races for me and the other co-drivers as we can use what we learnt today to make it a better race.”

“Today was certainly a typical wild Surfers Paradise race so it is good to see everyone has come out unhurt. As a team we certainly did not execute our plan and while Frosty and Will must be commended for their fighting drive to the podium, we had a real chance of winning the race today so it is disappointing to fall short of our maximum performance. However, Will’s maturity kept the car out of the chaos which made all the difference in the long run. Mika and Nick drove brilliantly well – Mika out front and leading the race, while Nick passed a lot of cars and brought the car back well up the field. Will’s stint was short-lived and he always performs well here, but today didn’t go his way. His speed is blistering but luck is eluding him in the races. David was well-placed heading into the closing stages of the race but an over audacious defence by Garth Tander ended his race. A good qualifying and much cleaner execution of our race plan should see us bounce back tomorrow.”