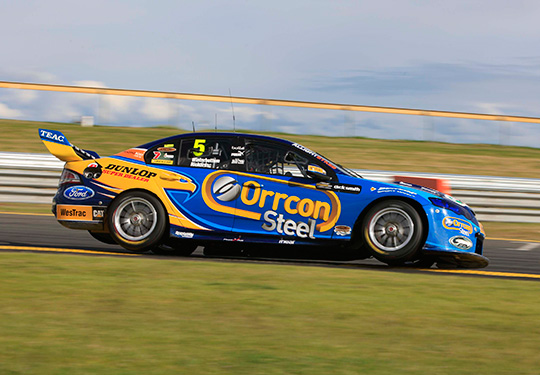 A blistering opening stint by Richards followed by consistent pace and a late race pass by Winterbottom on title rival Jamie Whincup ensured the pair overcame the dramas that sullied their Saturday pace.

David Reynolds and Dean Canto were on course to claim a maiden podium for Reynolds with Canto leading much of the first part of the race and despite Reynolds holding a comfortable third they eventually slipped to sixth after a delayed final pit stop due to a problem when replacing the brake pads.

Will Davison and John McIntyre started off the back row and tried a unique strategy to gain as much ground as possible. Davison was in the mid-field when he handed the car to McIntyre though a lack of pace late in the second stint coupled with a slow pit stop meant Davison was outside the top 20 when he retook the wheel in the last third of the race. Although nearly a lap down he pulled away from the leaders and recovered to 17th to highlight he would have been a threat if not taken out of yesterday’s qualifying race.

“I am really proud of the team today as second from 15th on the grid is no easy achievement. Richo was amazing at the start of the race and we made the most of our strategy. He really carved it up and then when I got in we held our ground before making the most of the great late-race braking performance and straight line speed. The pass on Jamie was something I don’t see any issue with as while it was hard it was legitimate and if the shoe was on the other foot I think he would’ve done the same. We now head to Bathurst with only a small gap in the points and with the knowledge that our car and driver combination is the best it can be.”

“Things go wrong in motorsport and you have to pick the pieces up and do what you can and today the whole team did that and we did the best we could so to get second is great considering where we started. This result is fantastic and is a great springboard to Bathurst. That said, we have to look at today’s race and work out what we can tweak to make us even stronger when we hit Mount Panorama.”

“There isn’t much positive about today expect the great speed we had in the car. I felt like I drove a really great race and I made up heaps of ground in my first stint and when I got back in the car at the end I was basically the fastest car out there. The safety cars came out the right time and that cost us a bit of ground but the last stop was the killer and we lost around 30 seconds there and we almost went a lap down. When we qualified on pole yesterday I wasn’t surprised and the car speed was great but it wasn’t our day today and we’ll bounce back for Bathurst.”

“Sometimes things don’t go your way and when you start 27th you need everything to go your way to get the big result and today they didn’t. The safety car didn’t come out when we needed it to and our strategy was based around those sorts of things but they just didn’t go our way. Now we look to Bathurst where we know we’ll have great car speed and I am really looking forward to that weekend.”

“My day was okay but we could’ve finished a lot better. Dean smashed it by starting second and bringing the car in first. The only issue was he smashed the dashboard display when he got out so I couldn’t read the display while I was driving. My stint went okay and I had good pace despite dropping to third due to fuel levels. At the last stop we had an issue fitting the brake pads and lost enough time to drop out of the podium spots. We didn’t lack much today so while I am disappointed I know we are going really well.”

“There was a little hiccup at the start and I bogged down and lost a place and then after that I settled down in third and piled the pressure on and got second place. We pitted early and I did as many consistent laps as I could. The tyres hurt near the end of my stint and I could maintain the gap in the lead before I handed it over to Dave. We performed as well as we could though the 10 seconds we lost in the pit stop hurt us so we could wonder what might’ve been but we are already looking to Bathurst.”

“It is great to end the weekend with a podium and three cars we know are very quick. Frosty and Richo drove a brilliant race from 15th and Mark’s outstanding pass near the end of the race shows he has the resolve to be a title contender. In all, everything went right for them so it is great to secure our eighth-straight podium finish in the pre-Bathurst 500km race. Dave and Dean were just as impressive and if it wasn’t for delay at their pit stop we might be talking about two cars on the podium. Will and John always had a tough battle on their hands given their grid slot and despite their dramas Will showed his pace is not an issue so come Bathurst we know all three cars will be contenders.”