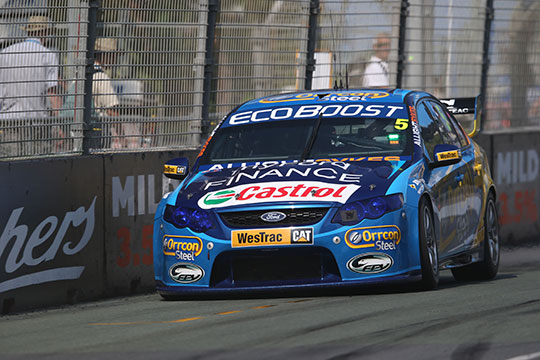 Ford Performance Racing is looking forward to the challenge of three sprint races on its trip to Abu Dhabi after the team won last time out with Will Davison on the Gold Coast.

The win and two podiums for Mark Winterbottom keep the team’s 2012 title aspirations alive and Winterbottom’s strong record at Yas Marina has him well-placed to make up ground.

‘Frosty’ has only ever missed the podium once at the Middle-Eastern venue and enjoys the challenge of sprint racing. Davison’s win last time out was his seventh of the season and he wants more to add to his growing career tally.

David Reynolds stormed from 21st to fourth on his last visit to Yas Marina and with his confidence at an all-time high he is aiming for a break-through win on the 5.55km Formula 1 circuit.

DRIVERS’ VIEW
Mark Winterbottom – #5 Orrcon Steel FPR Ford:
“It is good to go back and be with the Formula 1 scene as it gives the event a different feel. The sprint races will reward good qualifying and that has been our strength of late so hopefully that works for us. The facility is impressive though using the F1 layout means past results don’t mean too much as the racing will be different. We saw at Sandown in the sprint races the racing was frantic and that should be a good gauge for Abu Dhabi. It will be tight but we need to win races and score more points than Jamie (Whincup) – that is our goal for the weekend.”

Will Davison – #6 Tradingpost FPR Ford:
“It’s crunch time in the championship for the contenders but for me I am looking forward to attacking the rest of the year and ending the season in style. The race format is very different with three sprints which present a unique challenge especially with the qualifying format. I’m expecting a fair bit of madness as the circuit emphasises great racing and using the Grand Prix circuit will create even more overtaking opportunities. I wish I was in the title hunt but I can use that to my advantage as the car is good enough to win and I can attack. The crowd will be big and it should be a fun week.”

David Reynolds – #55 The Bottle-O FPR Ford:
“I am looking forward to racing in Abu Dhabi as I love the facility, it is fantastic and I really enjoy going there. The new layout means it will be one of the longest laps we race this year and it will be cool to race on the Formula 1 track as I never really liked the shorter track we used last time. Qualifying is going to be challenging but it is the same for everyone. Sprint races are my favourite as that is what you do mostly in the junior ranks coming through. It is pure racing so I am excited.”

Tim Edwards – FPR Team Principal:
“It was good to end the endurance component of the year with a win though we have another very different task to focus on this weekend with our trip to Abu Dhabi. It is a truly spectacular facility but with the format on offer we will need to be on top of our game all weekend. The toughest thing will be trying to get in three good qualifying laps in 20 minutes but we enjoy racing at Yas Marina so we are looking forward to the challenge.”

NB: Friday’s single 20-minute qualifying session sets the grid for all three of the weekend’s races. A driver’s fastest lap sets their grid position for the first race, their second-fastest for the second race and third-fastest determines where they start the final race.

CIRCUIT: Yas Marina
LENGTH: 5.55-kilometres
The circuit is one of the most advanced in the world and wraps around the Yas Marina and hotel complex – at one point passing under the hotel. For 2012 the series competes on the full 5.55km layout for the first time which includes the stadium section and the full length of the back straight. With its desert location, hotel, marina and floodlit surface –the venue is truly unique in world motorsport.
TRACK RECORD: New circuit length
FPR BEST RESULT: 2nd – Mark Winterbottom, 2010