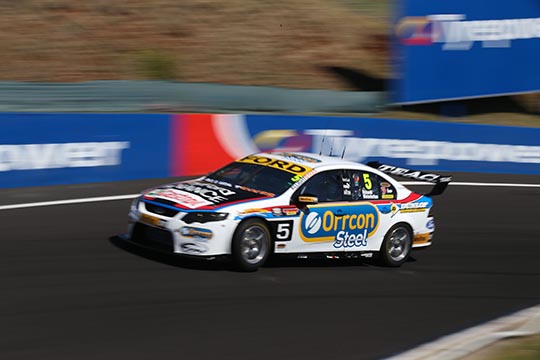 Ford Performance Racing has qualified all three of its cars in the top 10 at Bathurst ensuring the team has three chances at claiming pole position during tomorrow afternoon’s Top 10 Shootout. The 40-minute qualifying session was a test of drivers and cars as temperatures moved into the high 20s and with slower times than expected the field spread was minimal. Davison was the early pace-setter and despite being bumped to fourth by the end, he used one less set of new tyres than his rivals to give him an edge later in the weekend. Winterbottom looked in jeopardy of missing the top 10 until a later flyer after the chequered flag vaulted him to third. Reynolds was even less comfortable in 10th as the session built to its climax. He held off challenges from a number of drivers to claim the crucial final place in the top 10. With rain and cooler temperatures expected tomorrow there is every chance today’s form will mean nothing when the pole shootout begins.

Winterbottom: “My approach wasn’t to leave my lap until the end but it turned out that way. The car was good across the top of the mountain earlier today but that wasn’t the case in qualifying so we had to make some changes on the run. We tidied it up and that made it good enough to get me in the shootout. The one lap flyer isn’t our strong point but we have another session tomorrow and the shootout, but really it needs to just be good for the race.”

Davison: “Track conditions were tough with the heat and the wind. More rubber is going down but the wind is making it hard to get a set-up sorted. The track did come to us a bit early and I had a great banker lap early on a heavy fuel load which allowed us to save tyres. We probably didn’t need to make a run at the end but it was better to be safe. I caught a bit of traffic and had a bit of a moment even though I improved my time. Overall it was very encouraging and I am happy we saved an extra set of tyres so it is positive all round.”

Reynolds:  “I was lucky to make the shootout but it is great that I am now one of the top drivers that have the chance to requalify tomorrow so that is the main thing. We weren’t that quick though on the positive side we now have the chance to make some changes overnight to improve our speed. It will probably be raining tomorrow so today might mean nothing in the end.”

Tim Edwards – FPR Team Principal:
“Our only goal for the day was to get all three cars in the shootout and we achieved that which is great. The weather really changed things up and if we believe the forecast, very different weather could likely change things again so our work today may not count for much. We will work on the cars overnight and with an extra session in the morning we will continue to work on our race set-up.”