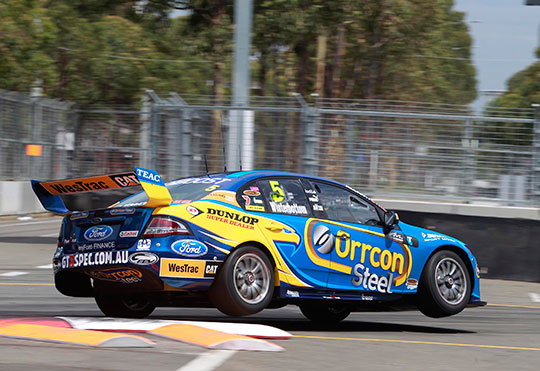 Ford Performance Racing has suffered at the hands of the searing Sydney heat and the torturous Olympic Park street track with Mark Winterbottom’s fighting drive to ninth the best of the day.

With the temperature topping 37 degrees Celsius prior to the race it was always going to be tough for cars and drivers.

Winterbottom vaulted from 25th after qualifying dramas and was in the top 10 when the bulk of the field pitted under an early safety car. He did not stop and moved into the race lead. The alternate strategy never really played out over the race distance and despite stopping for a late splash of fuel and being up to 10 seconds a lap faster than cars ahead of him in the closing laps he could only recover to ninth.

Front-row starter Will Davison vaulted to an easy lead early and looked well-placed to finally break his Homebush hoodoo until bending a steering arm. He stopped for repairs and went down several laps before the team pitted him for additional checks to ensure the car was safe to continue.

David Reynolds made similarly large early gains only to also suffer the same fate as Davison. He pitted from seventh with broken steering and later in the race stopped to replace a damaged race boot. By race end he recovered to 17th, one place ahead of his grid position.

Qualifying earlier in the day was held in mixed conditions and on a drying track Davison timed his run perfectly to claim provisional pole.

His team-mates weren’t so lucky as Reynolds could not improve at the end of the session and could only do enough to start 18th, albeit seven places ahead of Winterbottom who was forced to avoid a spinning car on his best lap and only managed 25th.

In the shootout Davison was on for pole position until he brushed the wall in the final sector and dropped to second at the line.

DRIVERS’ VIEW
Mark Winterbottom – #5 Orrcon Steel FPR Ford
Qualifying: 25th – 1m31.84s
Race Result: 9th – Fastest lap: 1m29.67s
“Qualifying didn’t go to plan but after 10 laps I was inside the top 10 so I had done a lot of the hard work and it was looking good. We then didn’t pit under that first safety car and that hurt my position and from there it just didn’t play out for the rest of the race. I bent my steering arm behind (Jamie) Whincup late in the race and with all the heat and effort needed to make up the ground we needed it was a tough race.”

Will Davison – #6 Tradingpost FPR Ford
Qualifying: 1st – 1m29.53s
Top 10 Shootout: 2nd – 1m29.63s
Race Result: 19th – Fastest lap: 1m28.96s (fastest lap)
“Today was another case of deja vous here at Homebush – leading the race and then I broke a steering arm. I don’t know what I have to do here to get a result. I was being cautious early on the kerbs to avoid a repeat of last year so I am not sure what happened. I was quick when I re-joined as I set the fastest lap of the race but couldn’t take advantage of that speed today.”

David Reynolds – #55 The Bottle-O FPR Ford
Qualifying: 18th – 1m31.19s
Race Result: 17th – Fastest lap: 1m30.07s
“That was probably the hardest day I’ve ever done in a race car. We had very strong pace early and I made up around 10 spots in the first 10 laps and I was carving through the field. Unfortunately we bent a steering arm and while I could’ve pressed on the car would’ve been fast and around here it is a real safety issue so we pitted for repairs. Then I came in as I needed my right race boot replaced and another steering arm so it was a really strange day. We’ve had a lot better days racing.”

Tim Edwards – FPR Team Principal
“Today was not one of our better days but to be honest with the weather we had I’m glad we’ve come away with the cars intact and our drivers okay. Our speed at this track is undeniable but today it just didn’t go as we’d hoped in all sessions. Will qualified well as he is somewhat of a specialist but he was once again denied the big result he deserves. Frosty and Dave did well to recover early in the race after their qualifying dramas but the race didn’t play out for us as a team as a whole so we have to work harder tomorrow to ensure we finish second in the championship.”