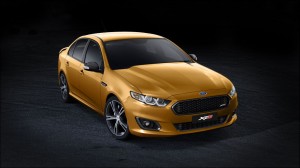 Ford Performance Racing face a race against time to have a full complement of FG X Falcons ready for its four drivers ahead of the 2015 season opener in Adelaide.

Aerodynamic testing for the new car is due in January with the first round of the series then scheduled for the last weekend of February, resulting in a tight timeframe for the team to get four cars up to spec.

FPR has guaranteed new FG X Falcons for at least Mark Winterbottom and Chaz Mostert while the customer cars may be delayed until Round Two or later.

“Car five and car six will be FG X at Clipsal and if there is a big tailwind – more,” Edwards told v8supercars.com.au.

“It might just look like it is a bit of facelift on the outside but once you start digging into it there is actually quite a lot of work involved.”

The road car equivalent of the FG X Falcon is a cosmetic update on the FG, and will be the last Australian built Falcon before production ceases sometime in 2016.

The chassis used for the FG Falcons can be upgraded to FG X standard as the update consists mostly of new exterior panels and aerodynamic alterations.

These new parts must wait for the completion of parity testing before manufacturing can begin, hence the potential for delay.

“We can’t do anything until mid-December and that’s when we will start manufacturing parts for the cars,” said Edwards.

“The chassis themselves don’t change, it’s everything that bolts on to the outside.

“It is relatively straight forward but there is still a lot of work involved in it.”

Edwards believes there is no real drama in running both the FG II and FG X at Adelaide, stating that the only problem would be to revert a chassis back from FG X to a FG II.

“Once you change – say car five is an FG X in Adelaide – you couldn’t then go ‘I think the aero balance on the FG is better’ and swap back to FG for Perth.

“Once you have changed there is no going back. But both models can run at the same time.”

The problems are furthered with FPR not sure exactly how many customer cars they need to produce. While the team will need to provide one car for both Charlie Schwerkolt and Rod Nash’s respective entries, it is still unclear whether a fifth car will need to be provided for Super Black Racing should they decide to compete full time in 2015.

“There is no requirement to have them all changed for Adelaide,” added Edwards. “If manufacturing hadn’t allowed for you to have 30 front bumpers made, for instance, then you might make the decision we will have two in FG X and two in FG.

“Then at the next race the other ones will turn into FG Xs.”

FPR has also continued to supply technical information to Dick Johnson Racing, with the soon to be rebranded team (from January 1 it will be called Team Penske) intending to have two new FG Xs ready for the season opener. Penske technical boss Nick Hughes recently spent the day with FPR to acquaint himself with the FG X.