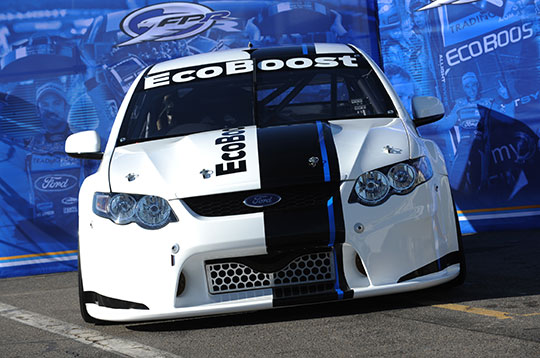 Ford Performance Racing’s Car of the Future program has taken another big step forward following the successful completion of the team’s latest test at the fast and flowing Sydney Motorsport Park circuit.

The test, held in near-perfect conditions, was the team’s first outing on a high-speed layout with its 2013 Falcon and provided the opportunity to test a range of settings.

Drivers Mark Winterbottom and Will Davison shared the day, with Davison spending the first half of the day in the car before handing over to Winterbottom for the afternoon.

Davison was pleased to spend so much time in the car and said the test showed how much fun the new cars are to drive.

“It has been another good day. Until we get here next year with everyone at the pre-season test we’re not really going to know where we stand but we are sticking to our schedule and everything is on track,” he said.

“I drove the first part of the day and then handed over to Frosty (Winterbottom) and we’ve both enjoyed driving the new car. It’s been fun to unleash it on a fast and flowing circuit compared to Winton and we’ve already gone quicker than when we were here for the race.

“We’ve undertaken some quick qualifying runs and some longer stints to get a read on tyre degradation and because we’ve had faultless reliability we’ve been able to achieve a lot.

“These tests are all about learning the car and how the rear end works with the new geometry and also re-learning how to make a car go fast given all the changes for next year.”

Engineering manager Mathew Nilsson believes the Sydney Motorsport Park outing has been the team’s best yet.

“It was a good day working on our planned program as we continue to learn about the new car. We focussed on some of the bigger changes to try and narrow the set-up window,” Nilsson said.

“It was a good opportunity to test at a new circuit, particularly one with high-speed corners as there aren’t many of those at Winton. It was also a positive day to complete a significant number of laps without a single reliability issue which is a credit to everyone at FPR.”

FPR’s COTF will now form part of Ford’s Australian International Motor Show stand where it will be on display from 19-28 October.