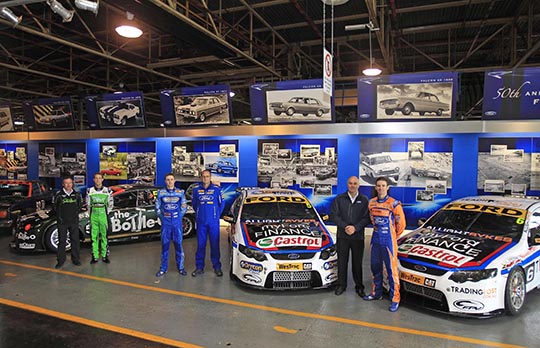 Ford Performance Racing is using past Ford Bathurst successes as an extra incentive as the factory Ford team chases its first success at Mount Panorama in the 50th anniversary edition of the Great Race.

Title contenders Mark Winterbottom and Will Davison will run the same livery used by legends Allan Moffat and Colin Bond when they finished 1-2 in the 1977 race.

Team-mate David Reynolds will pay homage to the first Falcon GT race winners in Harry Firth and Fred Gibson when he trades his regular race number 55 for 52D – the number used when the duo won the 1967 race.

Winterbottom and co-driver Steven Richards are among the race favourites after finishing second at Sandown, while former Bathurst winner Davison is looking for his second success in the race in his 100th event where he is joined by experienced Kiwi co-driver John McIntyre.

Reynolds and Dean Canto were cruelly denied a podium last time out and have the pace to get among the four cars that have so far won every race in 2012.

Two-time winner Richards is lining up for his 20th great race start and holds the record of the closest ever pole position at the track (0.0012s).

To add more importance to the race weekend Davison is making his 100th V8 Supercar event start at Bathurst.

“It is a real privilege to run such a historic livery in what will be the biggest Bathurst ever. One of my biggest memories of Bathurst is the 1-2 finish from 1977 and while I wasn’t born when that history was written, it is cool that 35 years later we are respecting Ford’s greatest win at the mountain. We’ve had a really good preparation, the team has given us great reliability all year, the momentum is good and each year we go there wanting to win it. That said you have to roll with the punches and if everything works out we will be in with a chance. It is hard to be good all day, but if we use our strengths we will be somewhere in the mix at the end.”

“Harking back to the history of the famous 1977 1-2 is pretty significant given this is the last year of the true Ford and Holden battles at Bathurst. This year we go there with three cars capable of winning. Last year we were good enough to be on the podium, but this year I really have enough confidence to say that when we get to Mount Panorama we will have the speed to challenge for the race win. The speed of our car has been great and I am sure our other two cars will be in contention as well.”

“Bathurst is by far the most important race of the year. While every race counts to the championship it is impossible not to get that extra burst of excitement and energy going into the race. Mount Panorama is an incredibly special track and with the form we have I know we go in with a good chance of winning, though it is a unique challenge and you need the racing gods on your side. After a disappointing Sandown we will be giving it a red hot go as we had the pace but lost points on the championship front. My crew have been meticulous in their preparation and we need a big haul of points but for me this race is all about the glory of winning after 161 laps.”

“I think it’s pretty fitting that I am going to Bathurst for my sixth 1000 start in car number six in a retro livery from 1977 which is also my birth year. Still with all of those things on my side, we will need everything to go right for us on the day both in and out of the car. After the Sandown experience we are all a bit wiser as a team and I now understand the way car six works in a long race situation. To be driving the Factory Ford with a Bathurst winner as lead driver is a head start, we as a team will need to do the rest. I really can’t wait to get there and soak up the atmosphere for what will be a very special event.”

“This is obviously the best race of the year. Everyone looks forward to it the most and you’d rather want this race than the entire championship. The car I’m driving this year at the mountain is different to what I’ve driven in the past but looking at this season the change has been a very good thing. I think we are in the top three driver pairings in terms of outright pace and while I lack a little bit of race experience at Bathurst, I doubt it will have any bearing on our chances. We are running the same livery as the 1967 race winner and it is sensational – it looks amazing, the guys have really done it proud so hopefully Dean and I can repeat the efforts of the first Falcon GT win.”

“Every driver loves racing at Bathurst and this year will be even more special with the historic livery we are using. The team has done an amazing job to be as accurate as possible and when you get up close you can see the detail. Dave and I were unlucky not to be on the podium at Sandown so with a chance to refine our pit stops since then we think everything is now in place to have a big chance at winning the race.”

“Bathurst is the one event we all rank above every other and winning it is the only goal we have when we go there each year. This year takes on extra significance due to the 50th anniversary and we are very proud to be racing in the colours of some of Ford’s greatest ever triumphs at the mountain. We think the fans will get a real kick out of it and it certainly gives us as the factory Ford team an added incentive to win. Our preparation has been as planned and the pace of all three cars at Sandown shows we’re quick enough so we will keep doing what we have been all year and let the weekend unfold.”

DESCRIPTION: The fastest of all V8 Supercar circuits, with cars reaching close to 300kph along Conrod Straight, Bathurst has it all, from a tight and twisting climb to the top of the mountain, to a fast flip / flop ride down that rewards bravery behind the wheel. This circuit is without a doubt a complex engineering exercise considering that two drivers need to be comfortable with the car set-up and that this event has now become a six hour sprint, such is the competitiveness of the field.