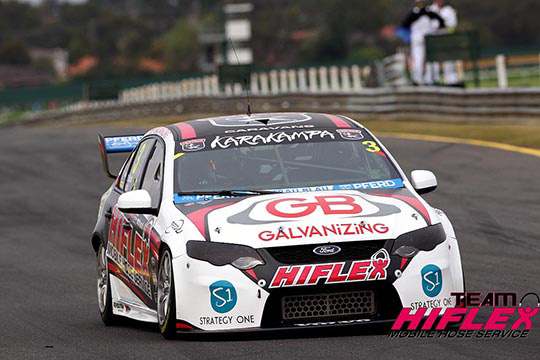 Versatile Italian race car driver Vitantonio Liuzzi will return to the streets of Surfers Paradise to compete with Tony D’Alberto in the #3 Team HIFLEX Ford Falcon in the Armor All Gold Coast 600.

Liuzzi, 31, drove for the team alongside D’Alberto in the ‘international inspired’ event last year, with the team electing to retain his services for this year’s October race.

It continues the ‘Italian’ heritage within the organisation, with both drivers of Italian background, as well as the team’s major sponsors HIFLEX and GB Galvanizing.

Last year, D’Alberto and Liuzzi were impressive in the Gold Coast race and were unlucky not to score a top 10 result. In Saturday’s first 300km race, a power steering failure derailed their hopes, before Liuzzi copped a controversial kerb-hopping penalty in Sunday’s event. The pair eventually finished 19th.

Liuzzi has raced at the elite level of motorsport, competing in Formula 1 across six seasons, driving for the likes of Red Bull, Toro Rosso, Force India and HRT.

He currently competes for CAAL Racing in the International Superstars Series, driving a Mercedes C63. He leads the series after 12 rounds.

“I’m really looking forward to be back to the Gold Coast for my second year with Tony D’Alberto,” said Vitantonio Liuzzi.

“I’m happy to be back in the series that keeps growing and is ultra competitive.

“V8 Supercars is always a dream category to me because I really enjoyed last year and performance and speed were good so I hope to repeat and become even stronger this year.

“I see that the team (Team HIFLEX) and Tony are having a stronger championship than last year so I hope we can aim for a big result this year.

“I’ve been working on more of my ‘Aussie slang’ too. My favourite is “bloody oath mate” I’ll try and use that when I can!”

“It’s great news to have Vitantonio confirmed to comeback to our team for the Gold Coast race,” said Tony D’Alberto.

“Our results last year really don’t really reflect the speed that he showed over the weekend. He improved everytime he went out in the car and wasn’t far off the pace by the end of the weekend.

“I’ve been keeping an eye on how he has been going in the Superstars Series, and I’m not surprised to see that he’s leading it.

“When he came out last time, he was a current Formula 1 driver. Now that he has spent the year inside a tin top, I am sure that he will be even more competitive.”

“I’m over the moon to confirm that our friend Vitantonio will be returning to drive with us at the Gold Coast,” said Al D’Alberto.

“Vitantonio was a hit with the fans and all of our backers last year, and we’re looking forward to him getting back down in Australia.

“The Armor All Gold Coast 600 event is one of the best that we go to. It has so much history, and I feel that Team HIFLEX will head there this year in a very good position.”