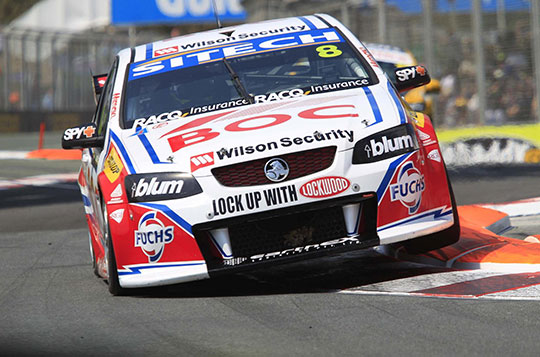 Frenchman Sarrazin, whose team won the FIA World Endurance Championship LMP2 category last weekend, was quick straight out of the box. In today’s two co-driver-only sessions he finished fourth-fastest of the international drivers with a time of 1:12.906.

Bright, meanwhile, finished down the order in his sessions after oil was spilt on track before the team fitted green tyres.

V8 Supercars will complete two 300km endurance races over the weekend with Sarrazin sharing driver duties with Bright, who is set to qualify at 9.35 tomorrow morning.

Jason Bright
Team BOC
“We ran old tyres in all four practice sessions, but towards the end of P4 we fitted a set of greens. We weren’t able to beat our quickest time due to oil spilt on the circuit.

“Sarrazin and I did a solid job and we can still improve in some areas. We were up there through all the sessions but tomorrow’s qualifying is what really counts.”

Stephane Sarrazin
Team BOC Co-Driver
“I am looking at improving on last year’s disappointing result. Jason is a good driver and it’s all up to him to qualify up the front of the pack.

“I think most teams are choosing their international driver to start the 300km race tomorrow afternoon. I’m really looking forward to racing with Jason and the Team BOC crew tomorrow. I’m sure we will be competitive.”