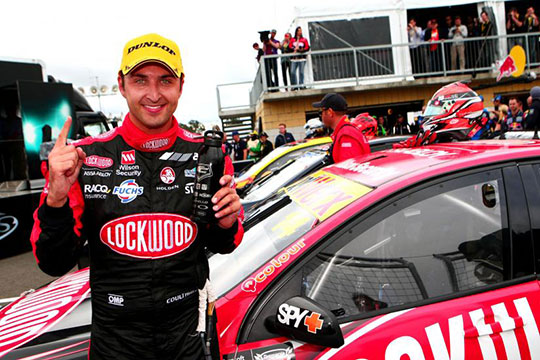 Fabian Coulthard has picked up from where he left off in Melbourne scoring his first V8 Supercar championship points win in the opening leg of the Tasmania Microsoft Office 365.

In the first running of the new 60/60 Super Sprint format, pole-sitter Jamie Whincup kept Coulthard at bay in the first 25-lap stint before the Lockwood Racing driver claimed the lead with a move on Whincup two laps into the second half of the race.

Undeterred by a late safety car and a small rain shower, Coulthard held on for the win, finishing a second clear of Whincup and Mark Winterbottom.

Despite race officials investigating a report of a restart rule breach by Coulthard, it was deemed that no breach had been made.

“The win at the GP didn’t go towards our championship so this is sweeter,” said Coulthard.

“One that counts means a little bit more so it’s pretty awesome to finally get one.

“Qualifying on the front row is also nice. We need to make up for the poor result we had at Clipsal. We took a pretty big hit there and we’ve got a lot of work to do. The key is to finish races.

“I don’t see myself going anywhere. I’ve got a good home in BJR; I’ve found a team I’m comfortable with and it shows now in my results.”

Jason Bright took fourth ahead of Garth Tander, the pair having locked horns in the opening leg, with Will Davison, Shane van Gisbergen, Scott McLaughlin, James Courtney and Jonathon Webb rounded out the top ten.

It was a day to forget for Craig Lowndes after he was muscled off the road by Shane van Gisbergen and a punctured a rear tyre sent him into a spin. After pitting for repairs, he struggled home after losing first gear a lap down in 26th place.