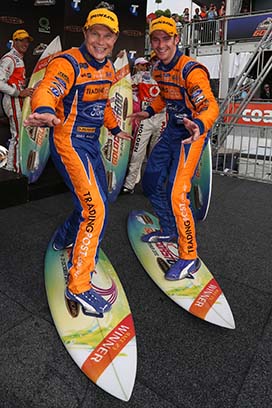 Ford Performance Racing has broken its win drought with Will Davison and Mika Salo scoring victory in the final race of the Gold Coast 600 – one year since the pair was robbed of a win at the same event.

Salo started in the car and after he was forced to pit early due to a flat-spotted tyre he went on to drive more than half the race before handing the car over to Davison in the race lead. Davison’s alternate strategy saw him emerge second after the final stop but he soon gained the lead and while he was challenged by series leader Jamie Whincup and team-mate Mark Winterbottom, he held on for his seventh race win of the year.

Winterbottom and Will Power claimed consecutive third places. Winterbottom took control of his car around one-third distance and a slick stop on lap 62 put him in the podium mix. In the closing stages he made several attempts to pass Whincup though after a late-race safety car he had to settle for third.

David Reynolds and Nick Heidfeld experienced an up-and-down day in finishing 13th. Heidfeld suffered slight damage on the opening lap and was then turned around at the hairpin which dropped him to near the back of the field. He recovered and smart strategy helped Reynolds move into the top 10 as the race moved into its second half.

Despite his best efforts he dropped a handful of places with just a few laps to go after a small error and finished mid-pack.

Winterbottom: “We had another good day but we had to make a small recovery after we had a little trouble in the pit stop where we changed our brakes. We weren’t quite square in the box and with so many other stops going on around me it meant I struggled to get out of the pit bay. We came out and tried as hard as we could but we used our rear tyres up a bit much getting back to the front. On the restart I tried to have a go at passing Jamie but he held his line and I couldn’t do anymore from there.”

Power: “I definitely enjoyed the race today. Like Mark said the pit stop was a bit hectic as suddenly I had a car to get around which is something I hadn’t experienced before today. I had a lot of fun and really enjoyed working with Mark. He is a brilliant driver and two third places give me two surfboards to take home and use on the lake I live on in Charlotte.”

Davison: “It is fantastic to get another win as it feels like so long since my last one. I actually had to fight much harder than I thought as Tim (Slade) came out in front of me after the last stop which I hadn’t thought of. Once I got past him I had to press on but also try and conserve my tyres which thankfully I had the car to do it with really easily. We were under a lot of pressure and Mika did such an amazing job so I am really happy for him that we finally got our win here. I let us down yesterday but we made up for it today.”


Salo: “I had a really good race and it is great to win but when I flat-spotted my tyre at the start I had so much vibration. We waited to get into the fuel window and then our strategy changed so I ended up driving more laps than Will. We had a good pit stop and he got to the lead quickly and we ended up with the win after Will held off Jamie and Mark. It is very satisfying to win here as we blew it last year and we blew it yesterday so at least now both my kids get a surfboard to play with in the snow back in Finland.”

Reynolds: “I’m sorry for Nick that we didn’t get the result we wanted but we haven’t really had the best weekend all round. We never quite qualified as high as we should’ve and that had a knock on effect in the races. The race set-up was much better than the one we had in qualifying though in the end I ran out of brakes and made a few silly mistakes which cost me some places. Nick was very, very impressive. He was quick, easy to work with and gave good feedback so I really enjoyed driving with him. I’m just sorry we couldn’t get a good result for him.”

Heidfeld: “We didn’t get the result we thought possible today but congratulations to Will and Mika for winning. The start was much better though I had nowhere to go and made a little contact with another car which delayed me. I then got into a good rhythm and was making progress when I got turned around by another car. Dave then recovered when I got out of the car as the team had a good strategy but we couldn’t quite get the result we wanted. I had a lot of fun though and it is a very cool event to be a part of.”

Tim Edwards – FPR Team Principal:
“I am really pleased for the whole team after our win. All three cars have been so quick in recent months but for one reason or another the win has eluded us. Mika was an absolute star again and drove more than half of the race, again handing the car over in first place. Will then redeemed himself and held off everyone to get our first win since May so we will enjoy this one. Frosty and Will scored another podium and both proved again why they are one of the best combinations on the grid. Dave and Nick didn’t quite have the day they wanted but Nick was certainly a good find. It is another quick turnaround for Abu Dhabi but we have good momentum from this weekend so we are looking forward to the trip.”