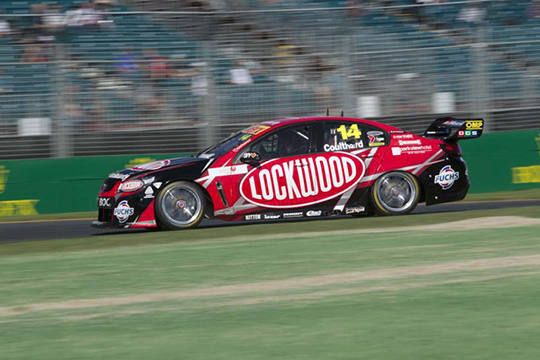 Fabian Coulthard has won the opening race of the MSS Security V8 Supercars Challenge at the Australian Grand Prix meet in Melbourne.

The Lockwood Racing driver led the opening laps but lost the lead when everyone completed their compulsory pit stop following a lap two safety car.

Fourth at the restart, Coulthard’s turn of speed saw him quickly dispatch of Craig Lowndes for third and then two laps later he passed Bright to take second.

With two laps to go, the New Zealander caught Shane van Gisbergen as mechanical troubles began to hamper the Tekno Autosports driver, swooping through to claim the 12-lap opener. Van Gisbergen subsequently pulled into pitlane with a broken gearbox and was unable to finish the race.

On the final lap, it was Pepsi Max Crew FPR’s Will Davison who took third place, after tyre degradation and contact with Jamie Whincup saw Craig Lowndes slide from third to fifth behind his Red Bull Racing Australia team-mate.

Lowndes only just held Mark Winterbottom and Scott McLaughlin at bay as the pair pulled alongside him at the flag, with James Moffat, Garth Tander and Rick Kelly rounding out the top ten. After the race, Winterbottom was dropped to 25th due to an unsafe pit release.

Lee Holdsworth was the best finishing E-Class AMG driver in 19th place, having survived contact with Alexandre Prémat when the Frenchman collided with the Mercedes after exiting the pit-lane following the compulsory pitstop. The impact sent Prémat into the wall with heavy damage and the #34 Holden will not return for the three remaining races.

The grid for the second of today’s two races is set by the finishing order from Race One.