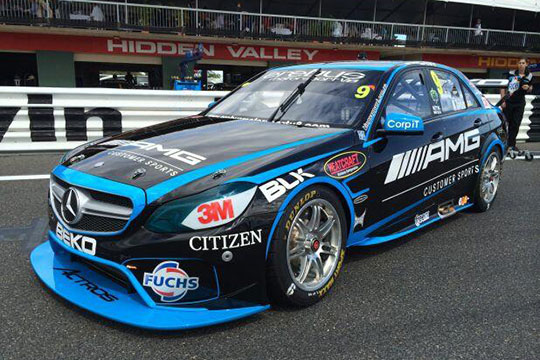 Erebus Motorsport will display AMG Customer Sports branding on its V8 Supercars for the first time at this weekend’s SKYCITY Triple Crown.

Erebus Motorsport is still running without primary sponsors this year, but the AMG logo will feature on the doors and bonnets of both #4 and #9 Mercedes-Benz E63 AMGs in Darwin after the team was granted approval to run the AMG branding.

Despite a two-year agreement with AMG Customer Sports and Mercedes-Benz Australia, the Erebus Motorsport entries have until now, not been permitted to carry Mercedes-Benz or AMG branding.

Talks between Erebus Motorsport and AMG Customer Sports to extend the relationships beyond 2014 are still continuing, but according to the team the AMG signage is “a symbolic gesture of the ongong discussions between the parties”.

“The discussions we are having with AMG Customer Sports in relation to a renewed partnership are very, very positive,” said Erebus Motorsport CEO Ryan Maddison.

“The addition of the AMG logo to our cars for this weekend’s racing at Hidden Valley is a representation of how those discussions are going.”