Erebus Motorsport V8 has shied away from a corporate team launch this year to reveal the team’s 2014 V8 Supercars livery exclusively online.

Both cars will run identical livery with major branding from Citizen, Fuchs and Beko.

“We are extremely happy and excited with the look of our cars for the year,” said Klimenko.

“I believe the designs and colours being introduced this year will hold the interest of race fans well after the fan-fare of a traditional season launch has subsided.

“This year we want to do it the Erebus way and we will present a cheque equal to what we would normally contribute to our launch to a very worthwhile cause.”

“The team’s new livery is a strikingly different look for the world of V8 Supercars,” said Maddison.

“For the first time the Erebus Motorsport V8 team has the opportunity to run sister cars with a design that lends itself towards a more futuristic and “Next Gen” appearance.

“It is important that we have branding friendly and exciting race cars, providing our partners with maximum opportunity to gain exposure for their respective brands.”

Lee Holdsworth and Will Davison will take to the track for the first time in the new-look Erebus Motorsport V8 machines this weekend at the sydney.com V8 Supercars Test Day at Sydney Motorsport Park. 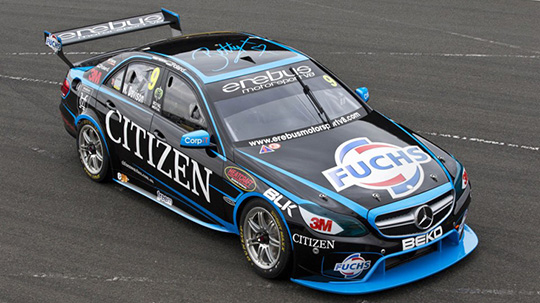