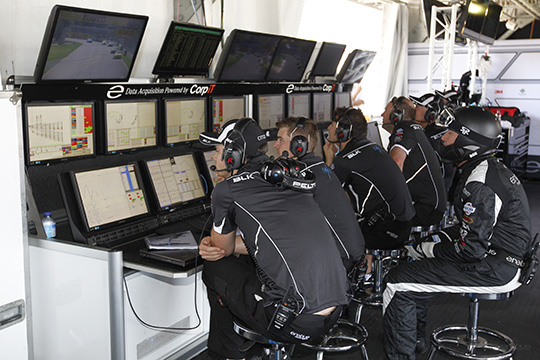 Stuart’s seven years of service for the Erebus Motorsport team (formerly known as Stone Brothers Racing) come to an end after this month’s Darwin race meeting.

The pair boast a wealth of experience in V8 Supercars, having previously worked on the cars of Championship winning V8 Supercars drivers such as Marcos Ambrose and James Courtney.

Erebus Motorsport CEO Ryan Maddison praised Stuart’s contributions to the team over the years and has faith the McDougall and Croke can continue to perform at the same level.

“David was a key part of the transition from SBR into who Erebus is today and what our future looks like,” said Maddison.

“It’s under David and Ross’ watch that we have made the transition to achieving front-running results and a race win.

“We do have a team of successful and skilled staff and it’s a compliment to David and the rest of the team that he has been chosen for such a key role.

“Our focus from day one has been to set ourselves up with structure and planning, and we are confident that Wes and Ben have the experience and skills necessary to assume even greater responsibility than they already have.

“Whilst it’s our loss, it’s pleasing to know that V8 Supercars are putting on the best of the best on behalf of the category and we fully support David’s decision to move on.”

Croke has spent the last five years working alongside Stuart after being promoted from No. 1 Mechanic on Ambrose’s Stone Brothers’ Championship-winning car.

“Having worked with David closely for the last few years it’ll be very sad to see him go but by the same token it’s a great opportunity for me to step-up,” said Croke.

“It’s something that you aspire to, so to be able to take the next step in a team of this stature and at this level feels like quite an achievement given there’s a lot to do in continuing Dave’s great work.

“I’m looking forward to working with Wes, his strength lies with the technical side of things and from my point of view it’s the operational side of things so I think we’ll make a great team.”

McDougall has spent ten years at SBR and Erebus Motorsport and continues to rise through the ranks after moving up from Senior Engineer to Head of Performance – Engineering at Erebus inside the last year.

“It’s been great working so closely with David since the beginning of 2008 at SBR,” said McDougall.

“David has been a key player in the transition from SBR to Erebus over the last 18 months.

“Whilst we’re sad to see him go, it offers an exciting opportunity for myself and hopefully we can continue the momentum and move Erebus further up the grid.

“I’m looking forward to working alongside Ben and extending on the relationship that we already have.”

Stuart has spent the last seven years as Team Manager and believes that the time is right to take on a new challenge.

“It’s an exciting time to be joining V8 Supercars with the new TV deal coming online next year and it’s an opportunity to further expand my own skills and career in a new position,” said Stuart.

“It’s very difficult to move on from a team like Erebus, I’ve been here for a long time and have had a long history with everyone that works here. But this is a great opportunity for me to develop further professionally and personally and it will also be a good chance for people within Erebus to challenge themselves further.

“The last seven years with Erebus and Stone Brothers Racing have been fantastic and I’ll look back on my time here as the fondest period of my motorsport career.

“Having the opportunity to work with two motorsport icons like Ross and Jimmy (Stone) and a fantastic crew has been amazing, and then when Erebus wanted to be involved in V8 Supercars and bring Mercedes-Benz into it, to be involved in that project has been absolutely phenomenal.

“I’d like to thank Ross and Jimmy for giving me the original opportunity and also to Betty (Klimenko) and Ryan (Maddison) when we became Erebus, I can’t thank them enough for allowing me the privilege of being team manager at such a great team.

“It’s been great to witness the progress the entire Erebus team has made over the past 18 months and I’ve got no doubt there will be even better results to come in the future.”

The team’s restructure will take effect after the SKYCITY Triple Crown in Darwin.