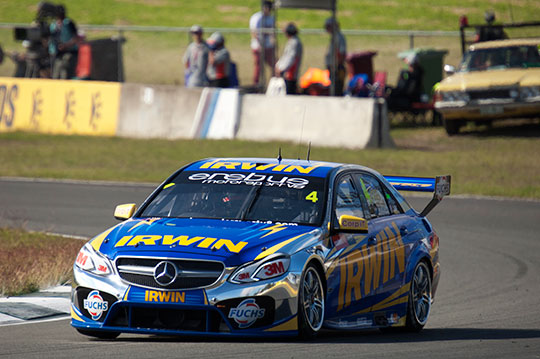 Erebus Motorsport V8 and Nissan Motorsport have welcomed the decision by V8 Supercars to trial a revised fuel blend at this weekend’s Winton 360.

One Erebus E63 AMG and two Nissan Motorsport Altimas will run on a slightly lower ethanol ratio than that used in the “control” fuel to give the two teams and V8 Supercars Commission the opportunity to assess a potential parity solution ahead of next month’s Sandown 500.

The decision to engage the fuel parity test program at Winton has been unanimously agreed to by every V8 Supercar team, given that there are no fuel stops scheduled in the two-half 40 lap race on Saturday or Sunday’s two 34-lap races.

“Erebus Motorsport V8 acknowledges the agreement from each V8 Supercar team and manufacturer to allow us to trial this fuel this weekend. We thank them for their combined commitment towards achieve a level playing field within the category.”

The new fuel blend is designed to work with the requirements of the double-overhead cam Nissan and AMG engines which have proved less fuel efficient than the push-rod designs of Holden and Ford. While an improved fuel consumption is expected, the blend will not alter outright performance.

“At the beginning of this year, Erebus Motorsport V8 came to an agreement with V8 Supercars and the other manufacturers with regards to aerodynamic parity – this is no different. It is about bringing each one of the four current manufacturers into line from a technical parity standpoint,” said Madison.

“By allowing us to trial the reduced ethanol blend fuel, we have the opportunity to enter the biggest races of the year on par with every other manufacturer and compete on a level playing field.

“It is the close competition of the sport that has given V8 Supercars its international recognition and foundation of success for the past 13 years, in essence, this is what the teams and category embraced when they moved to Car of The Future.

“We hope this development will increase the overall spectacle for the sport’s most important stakeholders, the fans.”

Nissan Motorsport team owner Todd Kelly is pleased at the V8 Supercars Commission decision to investigate the fuel economy concessions and cater for the multi-valve technology engine as part of the parity process.

“The sport has shifted significantly with new manufacturers after 20 years of the duopoly into one that now has a wide range of engine variance, and fuel consumption levels,” Kelly said.

“It is pleasing that V8 Supercars is being proactive in helping us, and any other manufacturer now or in the future, on a level playing field on the eve of the most important races of the year.”