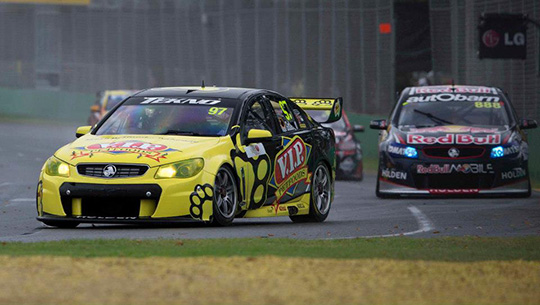 Race Three winner Shane van Gisbergen and Tekno Autosports team-mate Jonathon Webb have been disqualified from the results along with both the Red Bull Racing Australia cars of Jamie Whincup and Craig Lowndes, the Lucas Dumbrell Motorsport duo of Dean Fiore and Scott Pye and Nissan Motorsport pair Todd Kelly and Michael Caruso.

The breach of rules was a result of an inadvertent and accidental setting of the ignition timing which was picked up by V8 Supercars’ technical staff after the race.

The official line from stewards was that the teams admitted that their ignition timing exceeded the maximum allowable variance.

With van Gisbergen stripped of victory, Fabian Coulthard, who originally finished fourth, was declared the winner with David Reynolds and Jason Bright promoted to second and third respectively. The exclusion also forced a re-setting of the grid for race four less than half an hour prior to the start.

Although no performance advantage would have been gained by any of the eight drivers, the disqualifications have put some of the drivers out of contention of an overall weekend podium.

James Moffat was also handed a fine following a post-race altercation with Scott Pye after the third race.

The Nissan Motorsport driver was fined Aus$5,000 (of which $2000 has been suspended until the end of the year) for “physical contact” with Pye.

Moffatt was upset after the pair clashed several times during race three on Saturday and confronted Pye in the Lucas Dumbrell Motorsport garage. Moffatt is understood to have shoved Pye before leaving the garage.