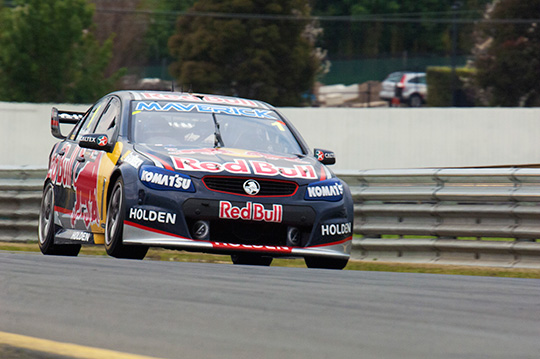 Paul Dumbrell has claimed victory in the first of two qualifying races ahead of the Wilson Security Sandown 500.

Starting from pole, Dumbrell led for all but the opening lap, briefly surrendering his advantage to Dale Wood (Wilson Security Racing) before going back in front with a dive down the inside at Turn 10 to win the twenty lap dash.

Despite the appearance of the Safety Car on lap 12, Dumbrell was quick to skip away after the restart and opened up a margin over Steve Owen (Pepsi Max Crew FPR) that remained unchallenged for the remainder of the race, handing pole position to Jamie Whincup for the second Sprint for the grid.

Four seconds back, Owen crossed the line for second having gained four spots off the line before passing Dale Wood on Lap five, with the Dick Johnson Ford coming home in third.

A post-race penalty saw the ekol Finance car of Scott Pye and Paul Morris sent to the rear of the grid after Morris’ part in an opening lap incident saw him spin his Lucas Dumbrell Motorsport team-mate Matthew Halliday around. Morris immediately returned to the pits with damaged left front steering, with Halliday (Dodo Insurance Racing) ending up at the rear of the field.

Johnny Reid (Team Hiflex) made a trip into the pits on lap five, heading directly into the garage with sticking throttle, repairs were affected to the Commodore and he returned to the track to complete the race.

Midway through the race John McIntyre was involved in contact with Ash Walsh (Wilson Security Racing), with Taz Douglas (Norton 360 Racing) hitting the rear of McIntyre as Walsh spun. McIntyre was forced to tour pit lane for a driving infringement and dropped to the rear of the field.

A broken gearbox ended Jeroen Bleekemolen’s (Team Tekno VIP) race on lap twelve and a Safety car was called the following lap to allow the car to moved off the track. Chris Pither (Wilson Security Racing) and Ryan Briscoe (Supercheap Auto Racing) made contact through the last set of corners, with Briscoe spinning and suffering front end damage.

Following the restart on lap fourteen, Walsh’s day was all but over when the bonnet flew off his Falcon, launching in the air at turn one and coming to rest over the fence in the gravel.

The second Sprint for the grid gets underway at 1438 local time.