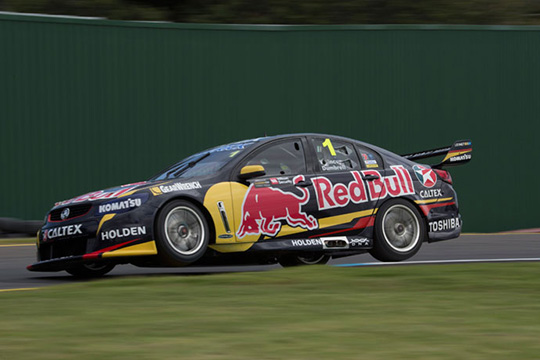 In the first of the two Sprint to the Grid qualifying races, the co-drivers who took to the wheel to determine the grid positions for their main game counterparts in the second race, and Dumbrell took the flag 6.87 seconds clear of second-placed Jonathon Webb.

It wasn’t all smooth sailing for the Dunlop Series driver as he had to wait until after the race for Stewards to clear him of making a possible jump start.

Webb put in a stunning drive to finish second after starting Shane van Gisbergen’s car from seventh. Webb was able to put a gap on the rest of the pack early in the race and chase down Steve Owen who had to settle for third in Winterbottom’s Ford Performance Racing Falcon.

Starting from third, Alexandre Prémat lost position after a slow start, but the Frenchman had the pace and salvaged fourth place in the leading Volvo S60.

The battle between the Holden Racing Team cars was eventually won by Greg Murphy after a couple of nervous overtaking attempts in the sister car of Warren Luff resulting in them finishing fifth and sixth respectively. Murphy sat behind Luff for much of the race, before making the move with three laps to go

The rest of the top ten somehow survived a manic final lap which saw Tony D’Alberto plough his Supercheap Auto Commodore through the grass after the pack attempted to navigate turns 2 and 3 four-wide. Along with the HRT drivers he led a freight train of cars that stretched from 6th to 22nd.

The Bottle-O Racing Team’s Dean Canto and Red Bull Racing’s Steven Richards finished where they started in eight and ninth while Brit Alex Buncombe put in an impressive performance in the Nissan Motorsport Altima to round out the top ten in his V8 Supercars debut.

Lurking just outside the top ten was the field’s biggest mover in Luke Youlden as he improved on Fabian Coulthard’s disappointing qualifying result of 18th.

The race was remarkably trouble free, with the only casualty resulting from mechanical failure. Chris Pither pulled off on lap 6 with an engine drama that may force the team to change engines before Dale Wood takes over for race two.

The main series drivers will take the wheel for the second qualifying race this afternoon, starting where their co-drivers finished.