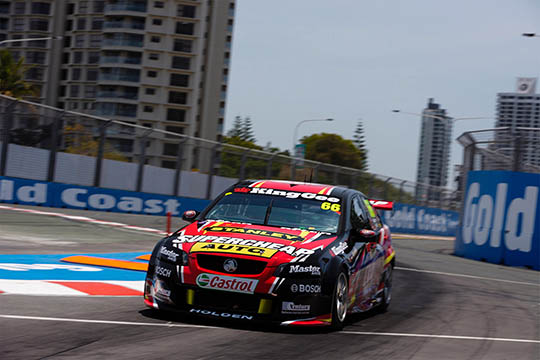 Dumbreck’s times were competitive among the other international drivers, despite it being his first outing on the Surfers Paradise street circuit.

The Scotsman improved his lap times in his two practice sessions as he familiarised himself with the car and track. He made light contact with the circuit’s unforgiving barriers on a couple of occasions as he found the limits of the SCAR Commodore, but thankfully the damage was purely cosmetic.

“It was a real acclimatisation to driving with walls all around me again,” Dumbreck said.

“It’s been a while since I’ve driven a street circuit, and I’m driving a quite unfamiliar car as well.

“By the time I got into my second session, I was obviously pushing quite a bit harder, as everyone else was, and that’s when you start to come close to the walls.”

Dumbreck says there will be a lot to think about overnight in preparation for tomorrow’s first 300 kilometre race.

“There’s a lot of stuff that I need to be adjusting, like roll bars and brake bias, so when you’re in such a tight little circuit like this and you don’t know it that well, trying to make all those adjustments is difficult.”

“It was a big day for Peter, having to still learn the car, learn the track and never having been here before,” Ingall said.

“Towards the end, he was getting down to pretty competitive lap times, and he was definitely amongst the top guys who hadn’t driven here before.

“I think our race setup is very good, so we need to work on our qualifying setup for tomorrow; qualifying is pretty important here.”