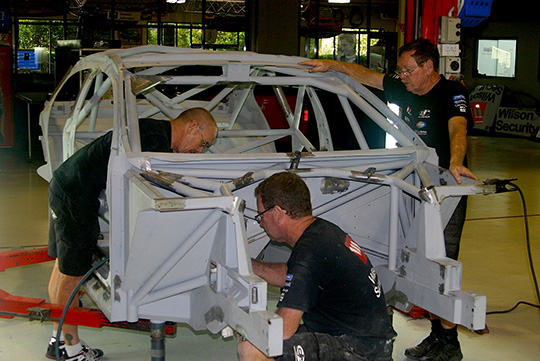 David Wall will start the next round of the V8 Supercars Championship with a brand-new Wilson Security Racing Ford Falcon after a heavy crash ruled him out of the ITM 500.

Dick Johnson Racing made the decision to build a complete new chassis for Wall in time for the Perth 400 event after Wall’s high-speed accident in the first race at Pukekohe left the car with substantial front and rear damage.

Contact with FPR’s Chaz Mostert through the high-speed turn 10 saw Wall spear across the road and into the concrete wall lining turn 11 at around 200 kilometres per hour in Friday’s race. Mostert emerged from the incident unscathed and went on to put aside the year’s difficult start notching up podium finishes in two of the weekend’s races.

The damaged chassis was the same one that gave DJR its first win since 2010 in the hands of former DJR driver Mostert at Queensland Raceway in 2013.

The damage was deemed too difficult to repair trackside due in part to what DJR senior manager Ryan Story described as a “tight turnaround” between the weekend’s event and the upcoming Perth 400 at Barbagallo. The 2014 schedule means teams must return from New Zealand and be race ready in Perth by the Friday 16th May, a tough assignment even without nursing damaged cars.

“David’s car sustained very heavy damage in the accident. There are major issues with the front and rear of the #17 DJR Falcon, with the front end in very bad shape. There is also damage to the firewall.

“With the tight turnaround to get the cars on their way to Perth, we are going to introduce a new one,” Story said.

Story revealed that DJR were in possession of a third chassis that was built at the same time as the two that have been in action over the past year.

“We have a spare, third chassis, built by Pace Innovations at the same time as the two we have been racing since last year. Paul Ceprnich and the team there have done a great job with it,” said Story.

Ford Performance Racing has also been credited with assisting the effort with Story acknowledging their help with “getting parts sent up for the build”.

Story has ensured that the car and team will be ready despite the tough week ahead.

“From New Zealand to Perth is a calendar nightmare when you sustain damage like we have, but the boys are into it already and we will see how it progresses over the coming days. We will be ready!” added Story.

Thankfully for DJR, the team’s other driver Scott Pye brought his car home in one piece in all four races with a top ten finish in race 12 the highlight of the weekend.