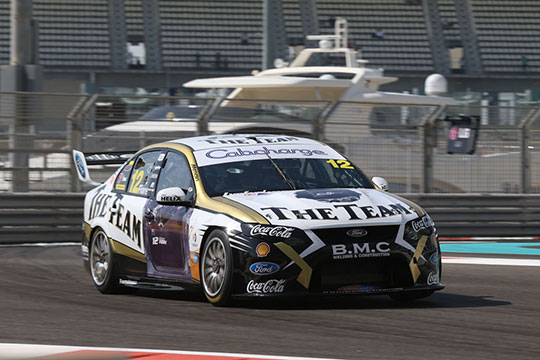 Dick Johnson Racing, the most successful and longest operating team in Australian motor racing history, today made an exciting announcement regarding the secure future of the 7-time Championship winning team.

The tri-party agreement between Team Owner, Dick Johnson, Owner and co-founder of Crimsafe, Steve Brabeck and successful Queensland businessman, Maurie Pickering, will see the formation of a new DJR Board. The team will move forward into 2013 stronger, more secure and more focussed on racing.

Dick Johnson, “Today we signed a Heads of Agreement between Steve, Maurie and myself for the future of DJR, which will disperse all the rumours we are dead and buried. We’ve been in the dark a long time but it’s now looking very bright at the end of the tunnel.

“We’re currently preparing three Ford Falcon Car Of the Future chassis for 2013 and look forward to getting out on track next year. But we still have two rounds to go of this season and are determined to show what we know our DJR cars are capable of,” Mr Johnson added.

Using the current DJR Racing Entitlements Contract (“REC”) and running a customer car under the Fiore Family’s REC, DJR is currently negotiating the third licence for 2013.

Maurie Pickering, “We have reinvented the wheel a little bit here today, but we are very excited about the opportunity we all have. Our aim is to bring the brand of Dick Johnson Racing back to where it should be, which is winning.

We will look to manage some of the opportunities which have been presented to us as a team more, and market the brand even better. We’re looking to embrace our relationship with Ford and get cars on the track with the latest technology in 2013 and win races. And that’s the exciting opportunity we have for next season. We now have certainty with the brand and with certainty comes sponsors,” Mr Pickering concluded.

Steve Brabeck, “We’ve had an association for some years with DJR, and the last two years have been spent trying to get the business back to a place where it can move forward again following the problems at the end of 2010.

“Now we are in the position with this new agreement where we can move the team forward with the association between ourselves, Maurie and Dick. We’ll be back on track to win races next year,” said Mr Brabeck.

Dick Johnson Racing travel to Winton Motor Raceway this week for Races 27 and 28 of the 2012 International V8 Supercar Series before the final event of the year at the Homebush Street Circuit in Sydney in December.