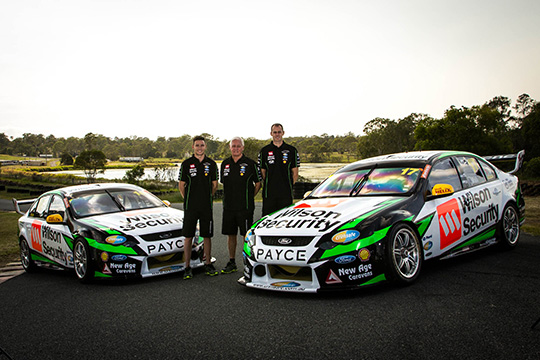 Lakeside played host to Dick Johnson’s first major success when he won the 1981 Australian Touring Car Championship after an epic battle with Peter Brock for the title.

The Wilson Security-backed Fords broke cover at the teams first ‘ride day’ of 2014 giving over 150 sponsors, partners and VIP’s a taste of the FG Falcon V8 Supercars over the roller coaster Lakeside layout.

Under the watchful eye of new sporting director Campbell Little, new recruits Scott Pye and David Wall got some valuable seat time to acclimatise themselves with the car ahead of the V8 Supercars Championship Test day at Sydney Motorsport Park.

“To be honest I did not think I would see our current cars pounding around Lakeside but let me tell you, this track gets your attention so it is good for the boys to come out here and really get to grips with the cars,” team principal Dick Johnson said.

“Seat time is so important now, and although we don’t race here, it will get Scott and David very focused on the job next weekend in Sydney.

“Having Wilson Security and Payce on board has allowed us to hit the ground running this year and we want to be on our game when we get to the Clipsal 500. The whole team is really fired up and we are ready to go!”

The team heads to Sydney Motorsport Park on Saturday for the first full test session of the 2014 season.