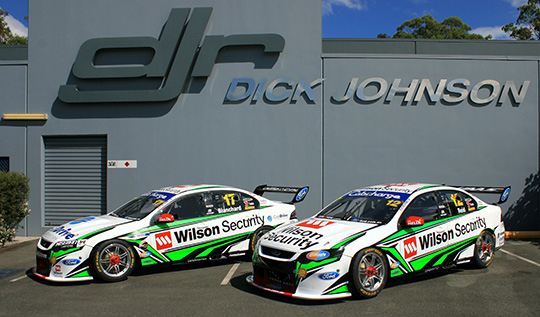 Dick Johnson Racing has secured an extension of its sponsorship deal with Wilson Security and revealed a new livery for its two Falcon V8 Supercars ahead of this weekend’s Tasmania Microsoft Office 365.

Wilson Security, which also backs David Wall’s #21 Brad Jones Racing Holden, increased its backing to both Dick Johnson Racing entries for the non championship MSS Security V8 Supercars Challenge, but has announced a further extension to that deal on an “interim basis”.

“Initially we stepped in to assist DJR with an immediate objective – that was to assist in ensuring they were at Adelaide,” said Wilson Security CEO John McMellan.

“The team did a good job in ensuring we received commercial outcomes from the initial support we gave them.

“On reviewing this we have decided that there is an opportunity to extend our support and relationship on an interim basis with a focus on building a commercial plan around DJR and our Queensland business operations.

“The aim is to link our DJR support directly with our Queensland business and measure the effectiveness of that.

“The duration of that support will be reviewed based on the commercial and other initiatives we can achieve in our Queensland business by leveraging this support. This also ensures that our main support and programme built around David, Fabian and Jason at BJR isn’t diluted or compromised.”

Team Principal Dick Johnson is pleased at the extension but acknowledged that the team still needed to find additional corporate support for the 2013 season.

“Having Wilson Security make a further commitment to DJR is a fantastic outcome,” said Johnson.

“John McMellan and his team have been immensely supportive and we are working hard to repay the confidence they placed with us at the start of the season.

“The cars have been freshened up and we have had some time after the AGP to work on a slicker presentation to give Wilson Security and all our partners a better package.”

Round Two of the 2013 V8 Supercars Championship, the Tasmania Microsoft 360 takes place at Tasmania’s Symmons Plains this weekend.