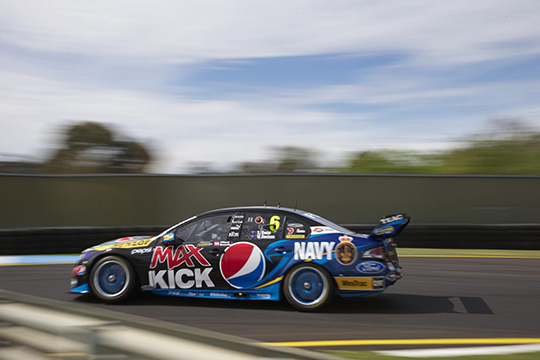 Will Davison and Steve Owen will start on pole position for the Wilson Security Sandown 500 after a dominant win in the second qualifying race.

Whincup led home Red Bull Racing Australia team-mate Craig Lowndes in second and third respectively after Lowndes, the big winner off the start, moved from fifth to third, slotting in behind Whincup for the race.

After an entertaining battle, Chaz Mostert (Wilson Security Racing) lost out to Mark Winterbottom on the penultimate lap, the #5 Pepsi Max Crew FPR driver pushing the younger driver wide through the opening corner to take fourth.

The race lap record was lowered twice during the race, first by Winterbottom, and then by Will Davison, beating Garth Tander’s 2009 record.

Holden Racing Team’s Garth Tander was in trouble early, his car stalled on the grid and he dropped twelve places before he was able to get underway.

Team Jeld-wen FPR’s Alex Davison also suffered damage in the opening lap, with the right front guard disappearing from his car. He pitted for repairs, and race tape secure, he re-joined the race at the end of the queue.