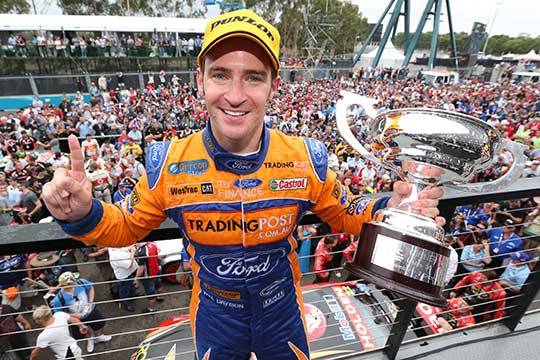 Ford Performance Racing has signed off the current V8 Supercars era in the best way possible with Will Davison scoring a commanding victory in the final race of the season.

Davison wrapped up the pole award in qualifying and then set about making it a double delight by comfortably claiming his first win on the Homebush track. In the last race for title sponsor Tradingpost, and at the home race of its parent company Telstra, the result was a fitting end to FPR’s best ever season.

Team-mate Mark Winterbottom was not so lucky as an incident on the opening corner of the race dropped him to the rear of the field, eventually costing him second in the standings. An overenthusiastic James Moffat punted Winterbottom into the turn one tyres at the first corner and while he was able to continue, he lost valuable ground. He recovered well only to pit from inside the top 10 nearing halfway with suspected broken steering. While only a puncture, the delay cost him a lap and from there he was unable to recover. His only consolation was setting the fastest lap of the race.

David Reynolds put in a fighting drive to jump from 15th on the grid to seventh at race end albeit by nursing a steering issue for the final part of the race. His result however left him an agonising two points short of the points needed to secure a team best eighth in the championship. Despite the narrow gap, ninth equals the team’s best and is Reynolds’ highest year end finish by a staggering 10 places.

In qualifying Davison was unlucky to miss pole but an incident for pole award rival Jamie Whincup meant second was enough to secure the one lap crown. Winterbottom was not as happy but still finished sixth while Reynolds only managed 15th.

DRIVERS’ VIEW
Mark Winterbottom – #5 Orrcon Steel FPR Ford
Qualifying: 6th – 1m28.11s
Race Result: 18th – Fastest lap: 1m28.48s (fastest lap)
“It was a bit of a disaster today. I had a great start and was up to fourth and then James Moffat comes from miles behind to clean up the front of the field. Then I had a puncture which I thought was a broken steering arm so that ruined my race further. I then got the fastest lap by a fair way so the car was quick but it was a disappointing way to end what has been a great year. Losing second in the points really hurts though so that is certainly a kick in the guts. It was good for the team to win the final race like I did last year but now it’s all about 2013 which for us begins next week with our big test.”

Will Davison – #6 Tradingpost FPR Ford
Qualifying: 2nd – 1m27.74s
Race Result: 1st – Fastest lap: 1m28.91s
“Today was no easy race but it was fantastic to win the final race of the season, of the current era and the final race for Tradingpost before they exit the sport. I am pumped to round out the year like this and to win at Homebush is a special feeling as I’ve come so close in the past. It was a great race and for once relatively straight forward. I settled into a good battle and managed everything I needed to so it was nice. I am proud to win the final race for Ford this season so I am going to enjoy our celebrations as the pole award was a nice bonus.”

David Reynolds – #55 The Bottle-O FPR Ford
Qualifying: 15th – 1m28.40s
Race Result: 7th – Fastest lap: 1m28.17s
“It is always a tough race around here even if the weather wasn’t a factor today. I am pleased to have driven through the field but I did make a small error which put me down the escape road at turn one so it could’ve actually been slightly better. Late in the race I smacked the kerbs and slightly bent the steering. I wasn’t sure how I’d go but I managed to actually gain a place and finish seventh so it was a hard race but a nice way to finish off the season.”

Tim Edwards – FPR Team Principal
“I am pleased we’ve ended the season with a victory and it is great for Will to finally score a win at a track he has been so quick at in the past. Dave battled home well and did a remarkable job in the closing stages, though I do feel sorry for Frosty as through no fault of his own he lost second in the points. We wanted that as it would’ve been just reward for a very good season but a win and the pole award are our compensation. Today marks the end of an era but for us 2013 has already started. We have a big three-car Car of the Future test next week and that is our focus now as the countdown to Clipsal is on.”