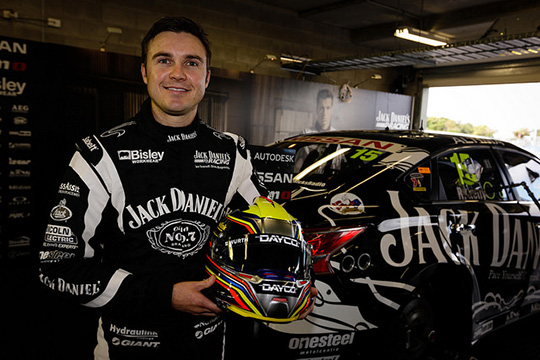 David Russell will return to the wheel of a Jack Daniels Racing Nissan Altima when he teams with Rick Kelly in this year’s Pirtek Enduro Cup.

Russell returns for a fourth successive year with the Kelly Racing outfit after partnering Rick in 2012 and Todd Kelly in 2011 and 2013.

Russell, whose career spans a variety of categories, including the V8 Supercars Development Series, Porsche Carrera Cup and GT racing will team up with Lago Racing for the Australian GT and Carrera Cup races at Phillip Island later this month and a long trip to Belgium for the Total 24 Hours of Spa in July before joining Kelly for the endurance events.

Unfortunately for Russell his 2013 Bathurst 1000 campaign alongside Todd Kelly came to an abrupt end when he collided with a kangaroo on the 20th lap of the endurance classic, before Kelly even had the chance to get behind the wheel.

“It’s fantastic to be joining the Jack Daniel’s side of the garage again, it’s four years in a row now, so I guess I must be doing something right,” said David Russell.

“I’m very happy to be joining Rick again for this year’s endurances races.

“Obviously I’ve been paired with Rick before, and also with Todd before. It’s great to be back in with Nissan Motorsport and Jack Daniel’s and I can’t wait for the season of endurance to start.”

Rick Kelly says signing Russell was a logical choice and the duo are keen to improve on their best race result of 12th in the 2012 Sandown 500.

“David has been a part of Kelly Racing and Nissan Motorsport for many years now, so it’s a great opportunity for him to join us again this year,” said Rick Kelly.

“That consistency with us is definitely a great thing, he fits in the car very well and his performance as a co-driver is right up there at the top level.

“So for us, it’s quite exciting to head to the endurance events with that confidence.”

Nissan Motorsport has now confirmed three of its four endurance pairings, with Dean Fiore partnering Michael Caruso and Taz Douglas joining James Moffat in the Norton-backed entries. An announcement on the remaining endurance co-drive alongside Todd Kelly is expected in the coming weeks.