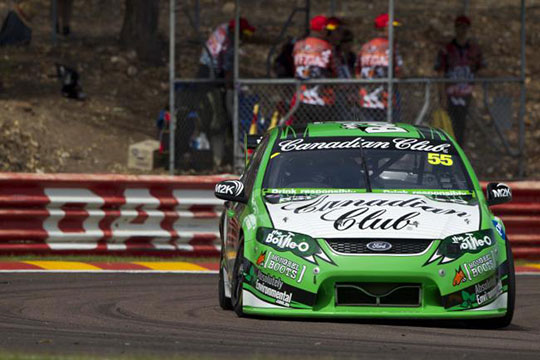 David Reynolds has claimed pole position under clear skies in the opening race of the SKYCITY Triple Crown at Darwin’s Hidden Valley Raceway.

With the qualifying session split into two sections, a twenty minute session to determine the top ten and a shootout in the afternoon, Reynolds had qualified for the Shootout in seventh, but a time of 1m:09.503s secured him the top spot for the 60/60 Super Sprint and his second pole position of his career.

Early in the opening session Dick Johnson racing’s young drivers Tim Blanchard and Chaz Mostert were at the pointy end of the top ten, however their times were soon eclipsed as the top drivers started to drop times in the 1m:10s bracket.

Fabian Coulthard (Lockwood Racing) then took the top spot with eight minutes remaining, the first man into the 1.09’s with a 1m.09.993s.

Mark Winterbottom (Pepsi Max Crew FPR) had been lingering in 28th position and was one of a handful of drivers still out on track with seven minutes remaining. However, at the three quarter mark the top five consisted of two Fords and three Holden’s with Will Davision leading the way, followed by the Brad Jones Racing pair of Fabian Coulthard and Jason Bright (Team BOC), Lowndes and Winterbottom who jumped in to the top five.

In the final minute Whincup leapt from the bottom of the order to the top with a 1.09.696, only to be then knocked into second at the flag by Lowndes with a 1m:09.685s.

The top ten then took the track in reverse order for the shootout with Rick Kelly first out posting the seventh fastest time with a 1m:09.96s. Next out on track was Van Gisbergen with a 1m:09.9627s, fractionally slower than Kelly for eighth. Tander was next out and running wide ended his lap with a time of 1m:10.39, taking ninth. A lightening quick Reynolds then jumped to the top with a time of 1m:09.50s that would remain unbeaten for the remainder of the shootout. Will Davision slotted in a 1m:09.56s to claim third, while Courtney posted 1m:09.58s for fourth, Bright hit the track next clocking a 1m:09.84s and landing sixth. Winterbottom lacked the pace with a 1m:09.72s and took fifth, while championship leader Whincup slotted into second with a 1m:09.51s. After a messy lap culminating with a 1m:10.60s, Lowndes finished in tenth.