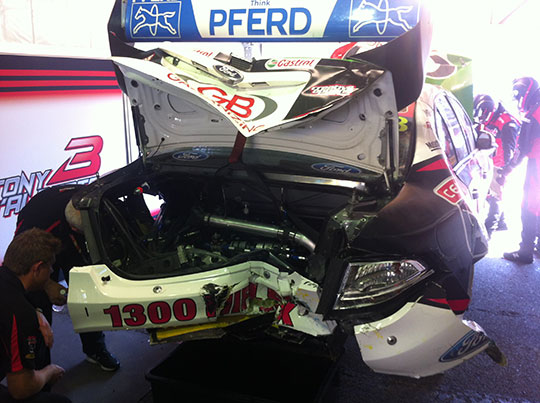 Significant damage to the #3 Team HIFLEX Ford Falcon has ruled it out of the remainder of the Armor All Gold Coast 600 at Surfers Paradise.

The news of the damaged machine comes as a bitter blow to the team who were enjoying one of its strongest weekends on record.

Lead driver Tony D’Alberto secured a place in the top 10 shoot-out before qualifying eighth with a solid lap.

International co-driver Vitantonio Liuzzi started the race, alongside all 27 other internationals, only to have the weekend cut short when he hit the slow starting Fujitsu Commodore of James Hinchliffe.

Further damage was sustained when cars collected him from the rear and the left, and Liuzzi watched as American Ricky Taylor rolled over in front of him in spectacular fashion.

The team will repair the #3 Team HIFLEX Ford Falcon before sending it back to its Melbourne workshop where it will be properly readied for the next V8 Supercars Championship event at the Yas Marina Circuit in Abu Dhabi.

“We made the shoot out and Tonio was quick, so once again, we’ve ticked all the boxes to get a result, but it hasn’t come,” D’Alberto said.

The accident was no fault of Tonios. He did a great job all weekend and I feel sorry for him because it would have been great to be in a position to get him one of those surfboards to take home.

“Unfortunately, we’re out now, the car’s not going to be able to be fixed. It’s a massive shame, but we’ll just press on and get ready for the next one.”

“I made a good start to the race, so it’s a shame that it ended like it did,” said Vitantonio Liuzzi.

“I had a much better start than the cars around us. I went to the inside, they closed the door, so I tried to avoid and go right, but there was a Fujitsu car standing still. It was impossible to change line.

“It was a shame. I was feeling strong for the week. Tony did a great job in qualifying. I’m confident that we could have fight for a podium.

“That’s motor racing, but unfortunately the car is heavily damaged and it has put us out for tomorrow.

“I definitely had the best view for the crash. It was like Days of Thunder with cars hitting me and cars rolling over. It was big.

“I’m upset for how it ended. We were better than last year, but now we look forward and hopefully we do something for next year.”