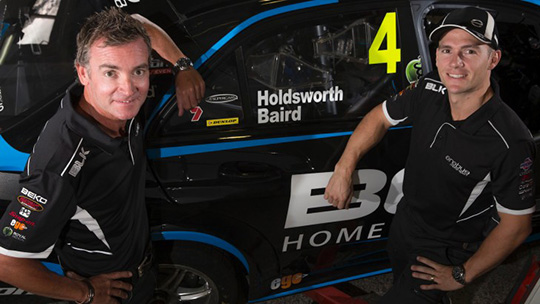 Carrera Cup king Craig Baird will team up with Lee Holdsworth for Erebus Motorsport in this season’s Pirtek Endurance Cup.

The partnership marks a third consecutive year together for the Queensland-based pair and completes the Erebus Motorsport Enduro line-up with siblings Will and Alex joining forces in the #9 car.

The pair will look to build on a strong 2013 Endurance Cup where they placed fifth overall after taking a team best fourth place finish at the Sandown 500. Their confidence should also be bolstered by Erebus Motorsport’s first win coming earlier this year at Winton.

Erebus Motorsport Chief Executive Ryan Maddison is confident in the pair saying “Lee and Craig performed fantastically during last year’s enduro series so it’s great to have them teaming up again.

“Craig is an experienced and accomplished driver in his own right and Lee’s Championship results for Erebus this year have been great, highlighted by his memorable win at Winton,” said Maddison.

“With the advances the team has made so far this year, I know the pair are really hungry to get back in the car together again and we expect them to be equally as competitive if not more than they were last year.”

The five-time Carrera Cup Australia champion will race in both the GT Asia series and Australian GT Championship before hopping into a V8 Supercar for the Pirtek Endurance Cup which begins in Sandown on the 12 September.

Baird is looking forward to re-uniting with the team saying “It’s always nice to come back to a place where you not only know the guy that you’re driving with, but the team and engineers as it makes it fit a bit easier.

“I know a lot of people say this and don’t mean it but I do, Lee and I are really similar in what we want with the car and what we feel so one thing I don’t have to worry about is setting the car up, I have 110 per cent faith in Lee and what he does with the car.

“I think the results we had last year based off a fourth at Sandown and a fifth at the Gold Coast, it wasn’t a bad result considering how new everything was. We certainly knew the car wasn’t where the guys wanted it and I think this year has proved that with all the hard work that’s gone on, the cars have definitely taken a step forward.

“For the team to get their first race win is a big achievement so I’m looking forward to jumping back in the car.

“There’s no reason in the enduros that we can’t look at get podiums. To say we are going to win Sandown or Bathurst, that’s what we all go there for, but last year the reality of podiums and wins probably wasn’t really there, whereas this year Lee has proved the speed of the car and himself, so we are as good a chance as anyone else.”

The Pirtek Endurance Cup covers three rounds starting with the Wilson Security Sandown 500 on 12-14 of September, continuing with the Supercheap Auto Bathurst 1000 on 9-12 of October and concluding with the Gold Coast 600 on 24-26 of October.