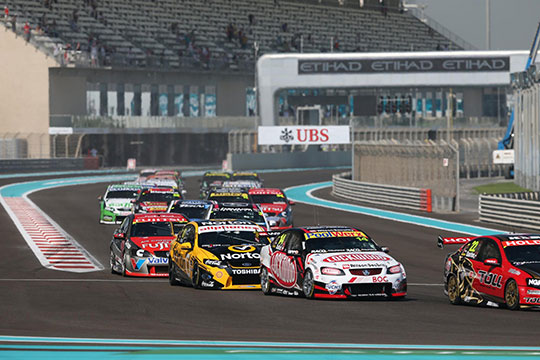 Finishing inside the top ten has become the goal this weekend after changes to the Yas Marina circuit since V8 Supercars’ last visit have made car set-up a puzzle.

In 2011 Lockwood Racing’s sister car, Team BOC, was fighting for wins but the circuit has lost grip since then and Fabian Coulthard says his P11 and P10 finishes in yesterday’s two sprint races were hard won.

Battling the car’s handling issues was only part of the trouble, however, with Coulthard criticising officials for not enforcing rules on curb hopping. In both races Coulthard was battling with Jonathon Webb who, according to the Lockwood Racing driver, was using more than the permitted allocation of road to maintain his position.

Fabian Coulthard
Lockwood Racing
“I feel this is probably the weakest round we’ve had to date, which is a little bit disappointing after the pace the cars had here last year. Obviously the track’s changed over time and what worked last year doesn’t necessarily work this year.

“The big thing for us is the car’s far from perfect. We’re struggling to get grip out of it. I spoke to Brighty and he said the same thing. We’re moving forward though, finishing races higher than we started, so it’s not all bad.

“It’s also not just our car speed. It’s other people and people policing what the rules are, abusing the excess outside the corners and nothing being done about it. That’s pretty hard to take when they set a precedent but don’t follow it up.”