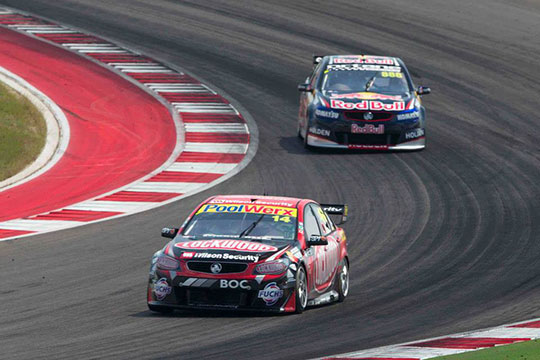 Fabian Coulthard has retained his victory in race three of the Austin 400 but been docked competition points after breaching the Safety Car restart regulations.

Coulthard was subject to a post-race investigation after he appeared to pull away too early at the restart following a Safety Car deployment mid way through the race.

However, the investigation also deemed that all top three drivers in the race – Coulthard, Craig Lowndes and series leader Jamie Whincup all failed to maintain speed. All three received 30 point penalties, but the outcome of the Circuit of the Americas race remained the same.

The points docking doesn’t affect the Championship standings, with Red Bull Racing Australia’s Whincup and Lowndes still one-two in the title hunt with 1217 and 1075 points respectively after dominating in Texas. Pepsi Max Crew’s Will Davison lies third with 1029, while Lockwood Racing’s Coulthard lies fourth with 954.

After the race, Coulthard admitted to accelerating away, but blamed it on a radio communications issue and said he tried to slow up to redress the error.

“I admit that I did pull away. I heard ‘green flag’ over the radio and then ‘no, no, no’,” Coulthard said.

“I did the best I could but I tried to make it that I bunched up again to make it fair.

“It was a radio communication problem within our team. We have had to change frequencies a few times over the weekend as I have been hearing two people on the radio.”