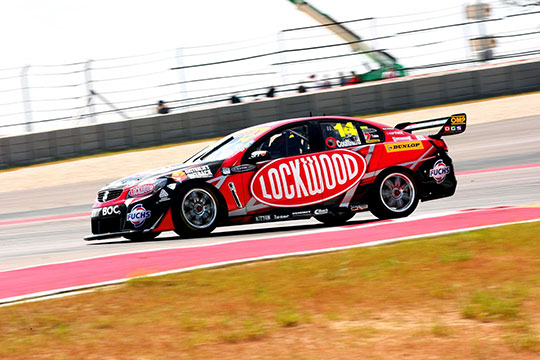 Fabian Coulthard has claimed victory in the third race of the Austin 400 ahead of Red Bull Racing’s Craig Lowndes and Jamie Whincup.

Coulthard may yet be stripped of the win pending the results of a post-race investigation after he allegedly failed to maintain speed at the restart following a Safety Car deployment mid way through the race.

Pole sitter Whincup leapt off the line with Pepsi Max Crew’s Mark Winterbottom on his tail as Lowndes, starting from second, dropped two positions at the opening turn, sliding across an oil slick on the track. Whincup accelerated away from the field, but an uncharacteristic mistake on lap four allowed Winterbottom to climb onto his rear bumper and passing his Red Bull rival as they re-joined the Grand Prix section of the circuit. Coulthard also took advantage, following the Ford driver through and the pair accelerated away from a lagging Whincup. The following lap Whincup slipped to fourth position after race engineer Mark Dutton advised his driver to not hold up his team mate if he didn’t have the pace to challenge.

Scott Pye (ekol Racing) continued his run of misfortune, spinning between turn one and two after contact with David Wall (Wilson Security Racing). The incident was one of a number that caught the eye of the stewards. Others included an incident between Todd Kelly (Jack Daniel’s Racing) and Alex Prémat (Fujitsu Racing GRM) at turn fourteen on lap two; and another involving Prémat and Tony D’Alberto (Team Hiflex) at turn fifteen on lap eight.

The window opened for the compulsory pit stop again on lap ten and the lane immediately became a flurry of activity. Race leader Winterbottom was followed in by Whincup, the latter emerging first after the Pepsi Max Ford again suffered wheel nut dramas in the same vein as past race meetings. A frustrated Winterbottom eventually left the lane in sixth position.

The Safety Car was then called mid-race for debris on the circuit and after three laps behind the pace car the race restarted proper on lap 16 with Coulthard jumping ahead of the field on the run up to turn one.

Rick Kelly (Jack Daniel’s Racing) who had previously been sitting in fourth position behind Whincup ran wide at turn one on the restart allowing Garth Tander (Holden Racing Team) to slip past. Winterbottom and Shane van Gisbergen (Team Tekno VIP) also passed the Nissan pilot in the ensuing corners.

With nine laps left to run Rick Kelly was shown a bad sportsmanship flag for blocking Team BOC’s Jason Bright’s efforts to overtake. Prémat again came under the ire of the stewards for having his wheels spinning during his pit stop, he was administered a Pit Lane Penalty for the infringement and duly served it at the end of lap twenty-six.