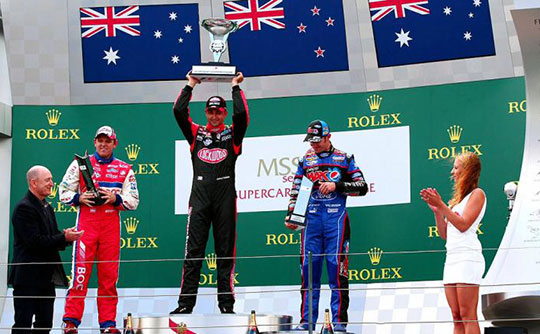 Coulthard’s third place result in the fourth of the weekend’s races was enough to seal the trophy following the Lockwood Racing driver’s three victories accumulated on Friday and Saturday.

“There’s no better person to dedicate this victory to than JR,” said Coulthard.

“He was a close friend and a BJR family member. Charlotte and the kids were here this weekend so it is a pretty emotional time.”

Two years ago Richards shone in a one-off return to V8 Supercars while battling cancer, scoring a podium at the Albert Park circuit in his final V8 Supercar race.

“JR had massive success here,” continued Coulthard. “We all miss him and he’s never forgotten and I’m sure he’s looking at us from wherever he is smiling.”

V8 Supercars will be back in action at Symmons Plains in Tasmania from 5-7 April and Coulthard is hugely encouraged by what he and the team have achieved.

“For myself, I take away massive confidence after this round. To finally beat all these guys on the same day is awesome for my confidence.

It may not be for points but it’s still a race and we’re racing against the same people.”