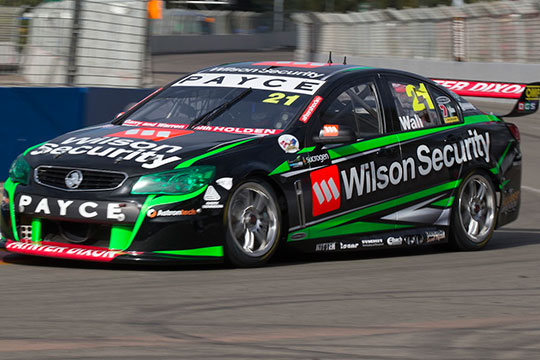 Pither, who currently competes for BJR in the Dunlop Series and paired with Wall at Sandown and Bathurst in 2012, will fill the place left after the tragic death of Allan Simonsen in this year’s Le Mans 24 Hours race.

The 26-year-old had been expected to land the drive after taking part in both co-driver practice sessions at Townsville and Queensland Raceway.

“It’s great to be doing it for a second year back-to-back and gain some momentum. I’ll be a lot more confident going into this year,” said Pither.

“I’ve done the two co-driver sessions at Townsville and Queensland Raceway, which gives you a taste of the car. Although it wasn’t a whole lot of laps it was a great chance to get a taste of the Car of the Future. Hopefully I’ll get a few more laps at Winton this week and be well prepared for Sandown.

“The Car of the Future is a lot more like a race car to drive than the old V8s. They feel like they do everything a bit better with the main thing being the change of direction. They’re a lot more flowing so it’s more like a real race car would feel and braking is another main difference.”

Wilson Security Racing will test later this month at Winton Motor Raceway in preparation for the Sandown 500 in September and the Bathurst 1000 in October.