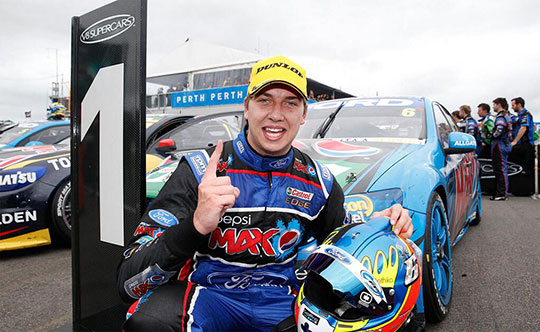 After a valiant drive to hold off three-time V8 Supercars series champion Craig Lowndes, Chaz Mostert has claimed his first victory for Ford Performance Racing in the final race of the Perth 400.

Mostert grabbed the lead from Red Bull Racing Australia’s Lowndes on lap 41 both with the help of pit strategy and the powerful Ford Pepsi Max Crew Falcon underneath him in the mid-stages of the race to earn the win, one year on from his elevation to the top flight V8 Supercars series. The 22-year-old from Melbourne successfully held off a hard-charging Lowndes cruising to his second race win of his short career two seconds clear at the end of the 200 km race.

“It’s fantastic,” Mostert said. “Coming off of Queensland Raceway last year and to get another win I’m just so lucky. A big thanks to the Pepsi Max crew and for everybody at FPR it’s awesome, first and third, it’s a dream come true this weekend. It’s fantastic.”

Mostert started the race in fourth-place but immediately got the jump on third-place starter Scott McLaughlin (Valvoline Racing GRM) to slot into third on the first lap behind polesitter Lowndes and FPR teammate Mark Winterbottom. The top-three remained in close proximity of each other through the early goings of the race with Lowndes holding the lead until the first round of pit stops.

The racing action across the entire track proved to be hard-hitting throughout the entire race. The battle for 24th-place featured a heated and physical battle between Dale Wood (Team Advam/GB) and Jack Perkins (Team JELD-WEN) across Lap 6.

Robert Dahlgren (Valvoline Racing GRM) also took his own share of knocks on Lap 12, jostled around by the field and being shuffled down the standings. Dahlgren’s hairiest moment came on two laps later when he punched in the left-rear fender of Michael Caruso (Norton Hornets) during the mid-field battle.

Some teams took gambles with their setups for Race 16, running high levels of tyre camber on their vehicles. While some teams were able to have their tyres hold up throughout the race, others were not as lucky. Four drivers amongst two teams would endure left-rear punctures in the middle of the race.

Both Erebus Motorsports drivers, Lee Holdsworth and Will Davison suffered punctures before the halfway point of the race. Shortly after, punctures for Garth Tander and James Courtney were to ruin a promising day for Holden Racing Team with Courtney on course for a podium.

The first round of pit stops took place on Lap 24 with Mostert leading the way. Then leader Lowndes would make his stop on the following lap while Winterbottom would bring the #5 Falcon to the pits on Lap 28. The decision to keep Frosty’s car out on a longer stint proved costly as the #5 team lost massive amounts of ground to both Lowndes and Mostert after the round of pit stops cycled through.

Contact on the track was not just limited to outside of the pit lane as Perkins and Holdsworth came together in the pits after a miscommunication by Perkins’ Team JELD-WEN spotter. The contact was investigated by the stewards who would handed Perkins a drive-through penalty.

McLaughlin, the winner of Race 14, was unable to reach the podium for the second time after making contact with Supercheap Auto Racing’s Tim Slade on Lap 37. The contact left Slade parked up in the garage for eight laps for repairs while McLaughlin would lose enough speed in his car to be relegated to a 17th-place finish.

With his win at Barbagallo, Mostert moved up to eighth-place in the drivers’ standings – 407 points out of the lead currently being held by Winterbottom.

Winterbottom maintains a 101-point lead ahead of the SKYCITY Triple Crown Darwin 400 to be held at Hidden Valley Raceway and set to kick off on 20 June 2014.