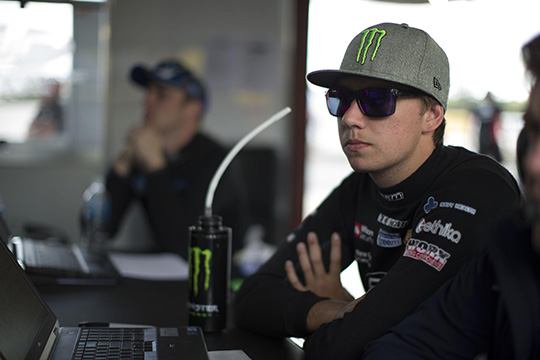 Mostert has been contracted to FPR since the end of 2011, but was loaned out to Dick Johnson Racing this year where the 21-year old rising star has gained valuable V8 Supercars Championship experience and scored a sensational maiden win at the Coates Hire Ipswich 360, despite missing the first three events.

“To be able to call myself an official Ford factory driver is truly a dream come true,” said Mostert.

“I may only be young but I’ve been working my whole career towards this.

“It’s going to be cool driving alongside Frosty. He has helped me so much already and we’ve come through the ranks in a similar way so I am looking forward to learning as much as I can from him and the team.

“It’s also cool to be working with Pepsi Max. As a young guy they are a really cool sponsor so I am looking forward to working closely with everyone there.”


The announcement coincides with Mark Winterbottom revealing an extension to his deal with the team.

Winterbottom agreed terms to extend his contract prior to his Bathurst 1000 triumph and will drive for FPR until at least the end of 2016.

“FPR and Ford are like family and by the end of my new deal it will be 11 years as a factory driver which makes me very proud,” Winterbottom said.

“Winning Bathurst ticked off one of the goals we’ve been working towards but now we want the championship too so the stability we have with our engineering group, Ford and Pepsi Max provides the perfect platform.

“I am also really looking forward to working with Chaz. He is a great young guy and in just a few months he’s shown what he can do so our fans should be really excited.”

“Next season promises to be one of the most exciting for Ford and Pepsi Max fans everywhere with a driver pairing which is going to generate a lot of interest,” Edwards said.

“Mark agreed terms prior to his Bathurst win and with an extension to our Ford deal it is the ideal scenario to have our team continue with the most successful driver in our history.

“He was already signed until the end of 2014 and the fact he wanted to recommit so early, and for so long, is a great endorsement.

“Chaz will be joining him and is here for at least the next four years which gives us two drivers that are passionate about our team and committed to winning. That should make all our fans and sponsors happy.

“He is the most exciting talent to join the series in recent times and is a product of our development program so it is personally very satisfying to see him graduate after such an impressive debut season.”

FPR is currently second in the V8 Supercars Team standings heading into this weekend’s Gold Coast 600 with Winterbottom third in the Driver points.