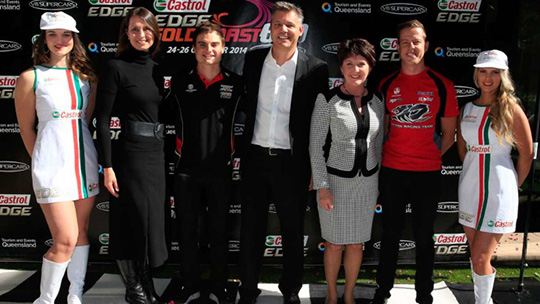 Castrol EDGE has been announced as the new naming rights sponsor of the Gold Coast 600.

“We are enormously proud to have Castrol as the major naming rights partner of the Gold Coast 600 following on from the great success of the partnership at the Castrol Townsville 500 – Driven by TAFE Queensland just a few weeks ago.

“Castrol is a global power brand and widely acknowledged as the world’s leading specialist provider of lubricant solutions. Their support over the next three years will drive the Castrol EDGE Gold Coast 600 to new heights.”

“We’re extremely excited to announce that Castrol will strengthen its partnership with V8 Supercars through a new, multi-year deal which sees Castrol EDGE as the naming rights sponsor to the Gold Coast 600,” said Hall.

“This is an event that is perfectly suited to showcase the strength of Castrol EDGE, our strongest oil ever, because of the extreme and punishing conditions that the Gold Coast circuit brings for both the cars and their drivers.

“We look forward to utilising our support of the Castrol EDGE Gold Coast 600 to entertain on a corporate level and showcase our performance product to millions of motorsport fans through global exposure of this action-packed event.”

The event is also set to continue to provide off track entertainment with a “Las Vegas-style day Club” presented by Billy Cross on McIntosh Island on the Friday and Adelaide hip-hop group The Hilltop Hoods performing on Saturday night.

The on-track entertainment has also been boosted with the return of Australia’s biggest and most powerful drag racing machines scheduled for the Friday evening.

“As a major point of difference we have invested our resource and focus into providing the highest level of entertainment on-track that the event has had in many years,” added Warburton.

“With the Gold Coast Light Rail now online and servicing two stops right beside the track, this one-stop entertainment precinct has never been easier to get to.

“The drags have also been added to the program while not forgetting the real core of the weekend which is a crazy 600kms of V8 Supercars on Saturday and Sunday as well as the Carrera Cup, V8 Utes and Aussie Racing Cars.”